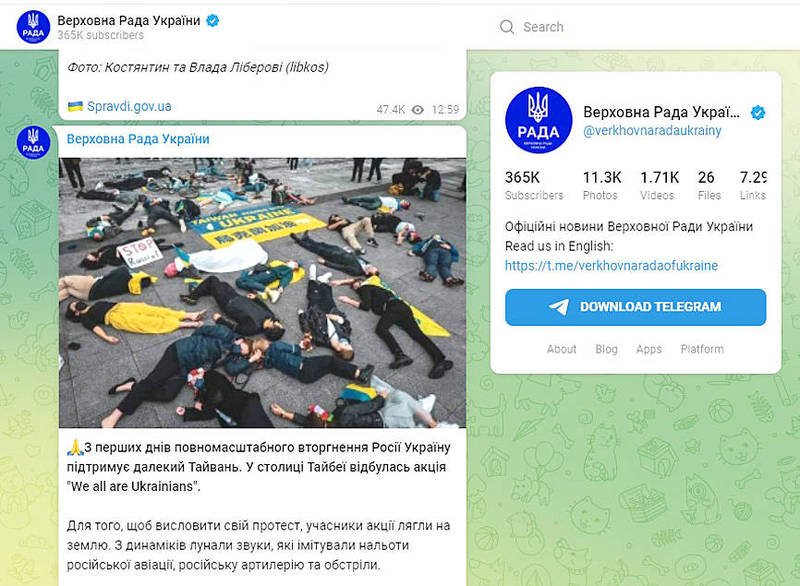 The Ukrainian parliament in a Telegram post thanks Taiwan for its support following a “die-in” protest in Taipei on Sunday. Photo: Screen grab from Telegram

The Ukrainian parliament on Monday expressed its gratitude for Taiwan’s support amid the Russian invasion.

The Verkhovna Rada in a Telegram post said that Taiwan has supported Ukraine “from the first days of Russia’s full-scale invasion.”

The post featured a photograph of a “die-in” protest on Sunday in what it referred to as the “capital city of Taipei.”

The demonstration, called “We are all Ukrainians,” was held to protest a reported massacre by Russian forces in the Ukrainian town of Bucha, its organizers said.

“The struggle for the future of Ukraine continues, and we are grateful for the support from around the world. The world is with us, because the truth is behind us,” the post said.

She reiterated the government’s stance that as a fellow democratic country, Taiwan would continue to support Ukraine by providing emergency supplies and hopes that the war will end soon so that Ukrainians can return to their normal lives.

She also repeated Taiwan’s call for Ukraine’s sovereignty and territorial integrity to be respected.

Taiwan opposes any unilateral changes to the “status quo” by force or coercion, she added.

Yang Syin-yi （楊心怡）, director of the ministry’s Department of West Asian and African Affairs, said that from March 7 to 18, the ministry collected 650 tonnes of medical supplies and other goods donated by 8,474 people in Taiwan.

So far, 200 tonnes of the supplies have been delivered to Slovakia and 100 tonnes to Poland, he said.

The ministry is in talks with Ukraine’s other neighbors that have taken in Ukrainian refugees to see if they need the supplies, he added.

Some of the money has been donated to Ukraine’s neighbors that are hosting Ukrainian refugees, Yang said.