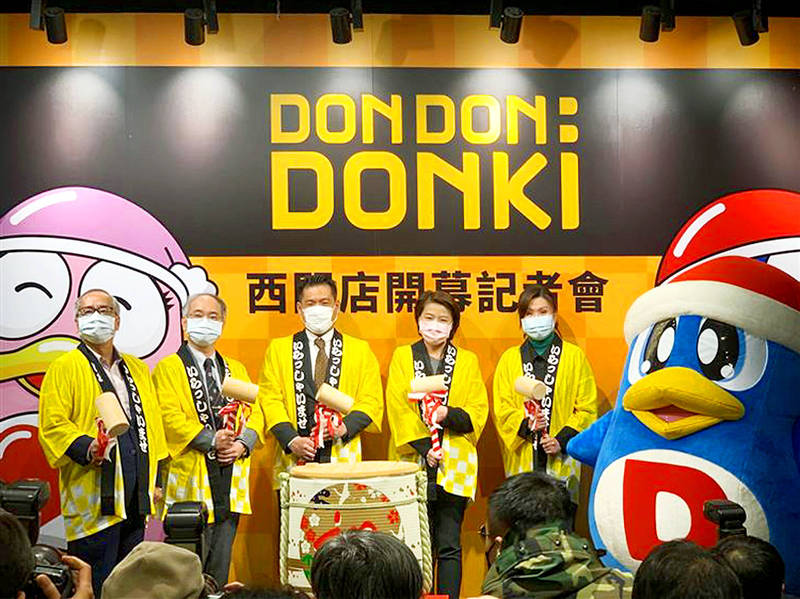 Don Quijote, the biggest discount store in Japan, is opening its first store in Taiwan today.

Many Taiwanese, including Taipei Deputy Mayor Vivian Huang （黃珊珊）, consider a trip to Don Quijote an essential stop in Japan.

“I have been to Don Quijote at least 10 times myself,” Huang said yesterday at a news conference announcing the store’s opening. “They are rendering an important service, because we cannot travel outside of Taiwan at the moment.”

“There are a lot of Don Quijote fans in Taipei and by going to the store they can get a ‘mock travel’ experience,” she said.

Huang credited the Invest in Taipei Office （ITO） for assisting Don Quijote in opening its doors in Taiwan amid the COVID-19 pandemic.

“The ITO and the MOEA were with the company every step of the way, from forming the Taiwanese company to selecting the location,” Huang said. “As a result, we have [today’s] opening and jobs for many Taiwanese workers.”

A media tour through the store yesterday showed that more than 2,000 Japanese snacks will be available, along with fruit and seafood imported from Japan.

Other products for sale include cosmetics and skincare products, groceries, discount items and even adult entertainment products.

The COVID-19 pandemic is the reason Don Quijote decided to open a branch in Taiwan, said Mitsuyoshi Takeuchi, head of the Hong Kong, Taiwan and Macau business for Pan Pacific International Holdings Corp, the parent company of the Don Quijote chain.

“In the past Taiwanese travelers would go to Don Quijote in Japan to pick up authentic products; now they can get the products they were used to picking up in Japan in Taiwan any time,” Takeuchi said.

The Taiwanese outlet is to focus on products, such as Japanese snacks, that are not commonly available in Taiwan.

Takeuchi said there is fierce retail competition in Taiwan.

“To compete with Pxmart [全聯實業] and Carrefour, we have to keep innovating with new stores and new services, such as delivery or e-commerce,” he said.