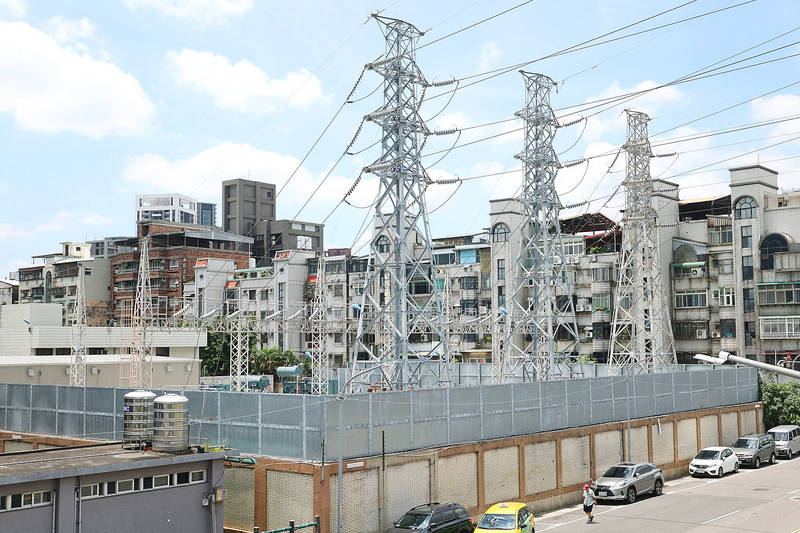 UNFORESEEN: Although Taipower anticipated heavy use by semiconductor firms over the summer, it did not expect the Ukraine war which caused coal prices to surge

Peak power usage reached 39.94GW at 1:40pm on Thursday, which was a record and only 60 megawatts （MW） shy of the utility’s predicted maximum, Taipower data showed.

In contrast, yesterday’s peak consumption slid to 38.95GW, as torrential rain in the afternoon helped lower temperatures and reduce residential use of air-conditioning, it said.

It previously forecast that peak usage would climb to 40GW late next month or in August, but it is possible that the peak could be reached earlier, Taipower spokesperson Wu Chin-chung （吳進忠） said during the company’s annual shareholders’ meeting in Taipei.

The company was rerunning its prediction model and would revise its forecast at the end of the month at the earliest, while “there is a chance that peak power usage will be even greater than 40GW next month,” Wu said.

Although Taipower had anticipated heavier electricity consumption from semiconductor companies this summer, it did not predict the effects of Russia’s invasion of Ukraine, which has caused coal prices to surge, Wu said.

The rise in coal prices has reduced local cogeneration companies’ profits and made them less willing to sell power to local corporate customers, causing those customers to instead purchase electricity from Taipower, raising overall demand, Wu said.

For example, local cogeneration power plants produced on average 1.2GW last year, but 450MW on average during the day this year, Taipower said.

The utility and the Ministry of Economic Affairs are on Monday to determine electricity pricing, which would likely affect consumption, Taipower said.

If rates are raised, individual and corporate users would have an incentive to reduce electricity usage, and local cogeneration power plants would be more willing to sell electricity, as their rates are linked to Taipower’s pricing, it said.

“We still have faith that we will supply enough electricity this summer by coordinating the plants more efficiently and by having two major electricity generators at the Linkou Power Plant （林口發電廠） and Datan Power Plant （大潭電廠） back in service in the short term,” Taipower acting chairman Tseng Wen-sheng （曾文生） said.

The company yesterday reported a cumulative loss of NT$46.9 billion （US$1.58 billion） for the first four months of the year, compared with a pretax profit of NT$14.7 billion a year earlier, because of higher fuel prices, it said, adding that its aggregate losses widened to NT$85.3 billion as of the end of April.