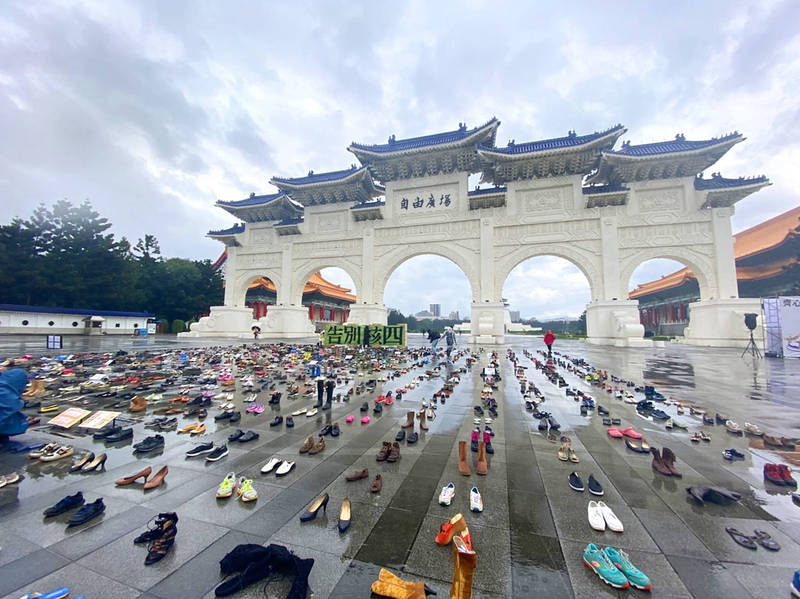 More than 1,000 pairs of shoes are lined up at the entrance of Liberty Square in Taipei yesterday. The National Nuclear Abolition Action Platform laid out the shoes to signify rejection of restarting construction on the Fourth Nuclear Power Plant. Photo: CNA

NUCLEAR RISKS: Taiwan is prone to earthquakes, and a nuclear plant would also be a dangerous target if China were to attack, Control Yuan member Eugene Jao said

Tien made the comments while presenting the results of an assessment of the response measures and costs of a potential nuclear disaster in Taiwan, and compared the data with Japan’s response to the Fukushima Dai-ichi nuclear power plant disaster on March 11, 2011.

Such a disaster at a Taiwanese nuclear power plant could require the resettlement of up to 10 million people, the report said.

Asked why the Control Yuan had held the news conference just ahead of the Dec. 18 referendum vote — which includes a question on whether to restart construction on the Fourth Nuclear Power Plant in New Taipei City’s Gongliao District （貢寮） — Tien said the assessment was a follow-up to a June investigation into the feasibility of activating the plant.

The second assessment required more time to complete, she added.

The Control Yuan has been assessing the power plant for more than a decade, during which time it has called for corrective actions related to it, regardless of which political party was in power, Jao said, adding that similar findings were reported during the presidency of Ma Ying-jeou （馬英九） of the Chinese Nationalist Party （KMT）.

“It has nothing to do with political stance. We simply present factual information,” he said.

In their report, the members found eight issues related to the plant, including the storage of spent fuel rods and the high risk of a nuclear disaster, and suggested that the Executive Yuan and government officials review their findings, Tien said.

“No place in the world has solved the issue of dealing with spent nuclear rods. Also, Taiwan is on geological fault lines,” Jao said. “Not to mention that we face the threat of a military confrontation with China. A nuclear plant would be a dangerous target.”

Broadcasting Corp of China chairman Jaw Shaw-kong （趙少康） yesterday called the report biased, adding that the Control Yuan was being run as an arm of the Democratic Progressive Party （DPP）.

“This [Control Yuan] is refereeing its own game. It has no credibility and is totally unfair,” he said.

Urging people to vote “yes” in the referendum on the nuclear power plant, Jaw said that Microsoft cofounder Bill Gates and Tesla CEO Elon Musk have also championed the benefits of nuclear energy.

The share of renewables in the Taiwan’s power supply increased by 4.8 percent during his presidency, but dropped to 0.7 percent under the DPP-led government, Ma said.

“If the government ends the use of nuclear power by 2025, every household would have to pay NT$30,000 more in electricity bills per year,” he said.

Separately yesterday, the National Nuclear Abolition Action Platform placed shoes in front of the Chiang Kai-shek Memorial Hall in Taipei’s Liberty Square as a form of silent protest against the use of nuclear power.

The group also put up signs in front of the square urging people to vote against restarting construction on the Fourth Nuclear Power Plant.

The group adopted the protest format of opponents of nuclear power in other countries as an alternative to its traditional rallies, which it canceled this year due to the COVID-19 pandemic, platform secretary-general Tsuei Su-hsin （崔愫欣） said.

Citizen of the Earth, Taiwan deputy executive director Tsai Chung-yueh （蔡中岳） said the platform had collected more than 1,000 shoes — each representing a voice of protest — in just two weeks.

“This demonstrates that there is quite a lot of opposition to the use of nuclear power, and that protest movements like this are on the right course,” he said.