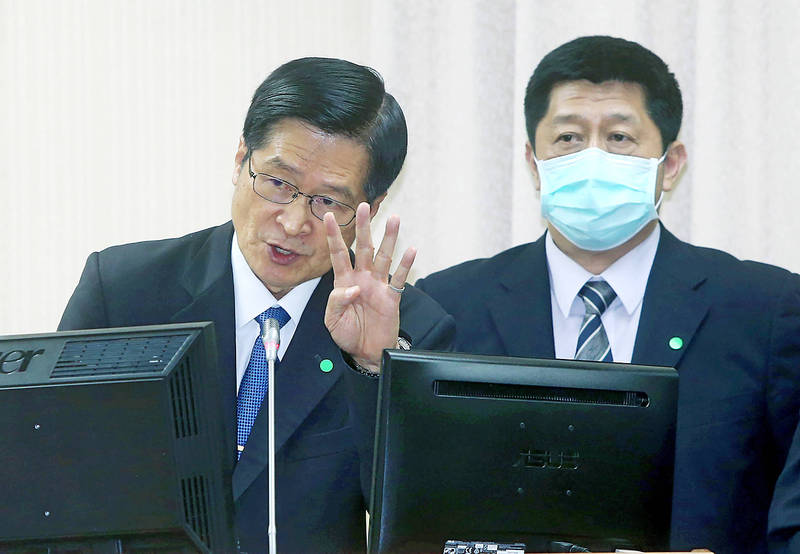 DEPLOYMENT SPEED: Association of Strategic Foresight research fellow Chieh Chung said that the key is whether reserve forces can be rapidly deployed when a crisis hits

The nation could deploy 450,000 soldiers — including roughly 260,000 reservists and 185,000 standing forces — as a first-response force in the event of a military invasion, Minister of National Defense （MND） Yen De-fa （嚴德發） told a meeting of the Legislative Yuan’s Foreign Affairs and National Defense Committee yesterday.

Chinese Nationalist Party （KMT） Chairman Johnny Chiang （江啟臣） asked whether the ministry had an estimate of how long it would take to recall reservists if a war broke out, adding that, if not, the ministry should definitely conduct simulation exercises.

The ministry has plans to conduct such simulations in 2022, Yen said, adding that recall and training programs would be staggered for the least disruption to social order.

Chiang said that the ministry must have the information, even at the cost of disrupting society.

The ministry has considered extending recall and training programs to two weeks to address such concerns, Yen added.

The Regulations on Leave Days for the Reservist Recall and Training Program （國軍後備軍人教育召集訓練期間休（請）假實施規定） state that reservists are not allowed to take leave during a recall, although an emergency might qualify them for at most two days’ leave, General Mobilization Office Director Han Kang-ming （韓岡明） said.

Recalled reservists receive the same punishment as active-duty soldiers for any breach of the code of conduct for military personnel, such as drinking alcohol before returning to base or not returning to base, Han added.

Existing laws do not require active-duty female soldiers to serve as reservists, but the increasing number of women in the military has prompted calls for them to be eligible for recalls.

In 2018, the ministry said that it might begin listing active-duty female soldiers as reservists, but so far no measure has been announced.

Asked whether the ministry should reveal the number of available soldiers, Association of Strategic Foresight research fellow Chieh Chung （揭仲） said that the figure is not sensitive information, as it could be deduced from public documents.

The key is whether reserve forces can be rapidly deployed when a crisis hits, especially when shorter reaction times are crucial as the Chinese People’s Liberation Army continues to improve its capabilities, he said.

The ministry’s response time is also dependent on whether the government declares a wartime emergency, which would have considerable social costs and affect diplomatic negotiations, Chieh said.

Lawmakers of all parties should consider if military conscription should be reinstated, he said, adding that the system is unwelcome by many, but might prove essential.

Given that, President Tsai Ing-wen （蔡英文） should speed up military reforms while her support base is strong and she is not under pressure to be re-elected, he said.

Improving the nation’s reserve forces is not just the ministry’s job, said Su Tzu-yun （蘇紫雲）, director of the Institute for National Defense and Security Research’s Division of National Defense Resources and Industries.

The Executive Yuan should coordinate with other agencies — including the Ministry of Education and the Ministry of Finance — and modify regulations so that schools and workplaces are more willing to release people for defense training, Su said, adding that tax exemptions, salary subsidies and bidding incentives are all feasible.