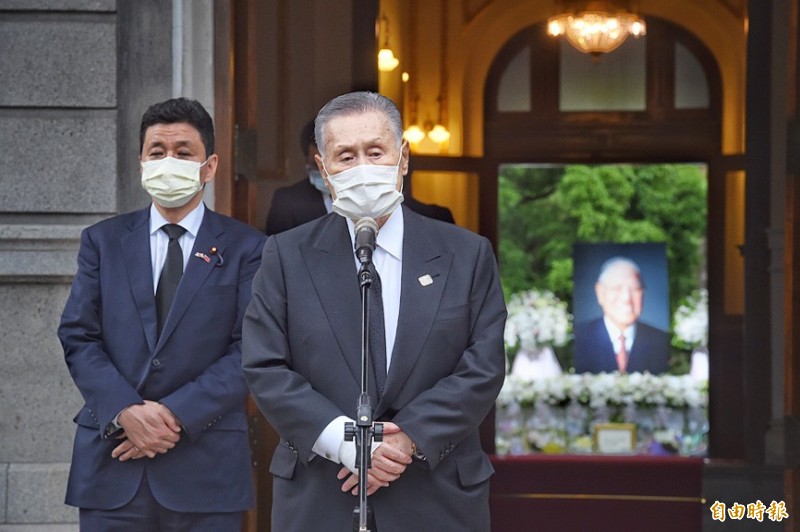 A Japanese delegation of parliamentarians from across party lines, led by former Japanese prime minister Yoshiro Mori, yesterday paid their respects to the late former president Lee Teng-hui （李登輝） at a memorial at the Taipei Guest House.

They visited President Tsai Ing-wen （蔡英文） at the Presidential Office Building at 4pm, before heading to the memorial at 5pm.

At the Presidential Office, Tsai thanked the delegation for their visit, and their long-term support and contributions to Japan-Taiwan relations.

Tsai especially thanked Mori for allowing Lee to visit Japan after he stepped down from the presidency, and also thanked Japanese Prime Minister Shinzo Abe and Japanese Deputy Prime Minister Taro Aso for speaking boldly in support of Taiwan’s participation in the World Health Assembly on many occasions.

She said that she hopes Taiwan and Japan can share information on the COVID-19 pandemic and the development of vaccines and medication, and continue to reinforce their good relationship.

Mori delivered a condolence message from Abe and expressed his gratitude and respect for Lee’s contributions to the Japan-Taiwan relationship.

He also said that he hopes the two nations can continue to be friends forever.

To avoid close contact with other people, the delegation, all wearing masks, arrived at the Taipei Guest House after it had been closed to the public at 5pm.

Lee Teng-hui made many contributions to international society, and while Japanese lacked confidence after World War II, he always encouraged them to be courageous and proud, Mori said.

He said it would probably take a hour for him to describe his deep relationship with Lee Teng-hui, but he always believed that he made the correct decision when approving his visa application to receive medical treatment in Japan after he stepped down from the presidency, even though China opposed it and the Japanese government was concerned.

The delegation left the Taipei Guest House at about 5:50pm.

During his 12-year presidency and after he left office, Lee Teng-hui always promoted better understanding between Taiwan and Japan, building the friendship between the two nations, he said.