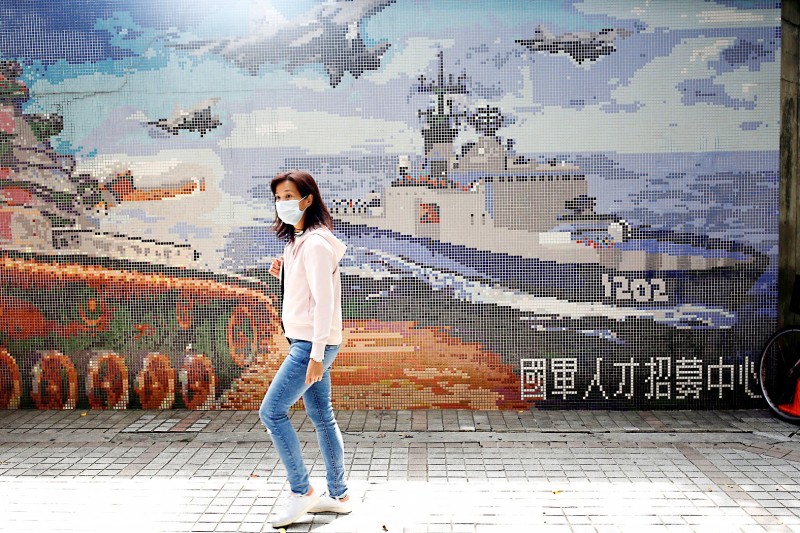 MONITORED: The center sent texts to more than 200,000 people who had been to places visited by the infected sailors, urging them to practice self-health management

The Central Epidemic Command Center （CECC） yesterday listed dozens of locations in 10 cities and counties visited by 24 sailors confirmed to have been infected with COVID-19.

It also announced two new imported cases, both women in their 20s who studied abroad and were tested at an airport after reporting symptoms to quarantine officers upon arriving in Taiwan.

Case No. 421 studied in Canada, developed a cough with phlegm on Monday last week and returned to Taiwan on Sunday, Minister of Health and Welfare Chen Shih-chung （陳時中）, who heads the center, told the center’s daily news conference.

Case No. 422 studied in the US, visited Spain from Jan. 14 to March 15, developed difficulty breathing, and throat and abdominal pain on March 8, sought treatment after returning to the US, and returned to Taiwan on Saturday, he said.

The new cases brought the nation’s total to 422, including 203 people who have been removed from isolation after treatment, Chen said.

The CECC also followed up on a cluster of 24 cases confirmed in the crew of the navy supply ship Panshih （磐石）.

The vessel, part of a “Friendship Flotilla,” visited Palau from March 12 to 15 before returning to Kaohsiung’s Zuoying Naval Base on April 9. The crew disembarked on Wednesday.

A total of 744 officers, sailors and cadets were recalled on Saturday evening for testing and put under 14-day centralized quarantine after the first case was confirmed earlier that day.

The center yesterday sent more than 200,000 text messages to people who had been to any of the more than 30 places in 10 cities and counties where the infected sailors had been for more than 15 minutes from Wednesday to Saturday, asking them to perform self-health management for 14 days, Chen said.

The CECC also published a link to an online map （bit.ly/2zdT9hH） showing the locations the infected sailors visited and the time they spent there.

Six of them sought treatment on their own from Wednesday to Friday, but were mostly diagnosed with allergic rhinitis, loss of smell, throat pain or respiratory infection, he said.

“Considering the timing of the onset of symptoms, we think the cluster of cases has already involved a second wave of infections,” Chuang said. “We also expect there might be more cases in the incubation period who will begin suffering symptoms in the following days.”

The center is investigating the source of infection, he added.

Chang Shan-chwen （張上淳）, convener of the CECC advisory specialist panel, said after retrieving medical records from medical officers on board the Panshih, they found five people had sought treatment for fever between March 21 and March 26, so those five were tested for COVID-19 antibodies on Sunday.

It is difficult to determine when they produced antibodies, but if the date they sought treatment marks the onset of symptoms, it was likely they infected others on board, he said.

A worker yesterday disinfects a gym in Pingtung that had been visited on two occasions by a sailor who was later confirmed to have COVID-19. Photo: Lo Hsin-chen, Taipei Times