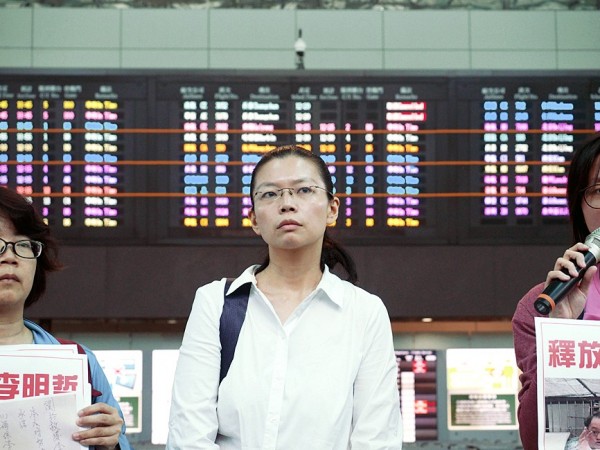 BULLYING TACTICS: Lee Ching-yu said that a Taiwanese man working on behalf of Beijing had tried to persuade her to give up her trip to China by threatening her

Lee Ching-yu （李淨瑜）, wife of detained human rights advocate Lee Ming-che （李明哲）, was yesterday prevented from boarding a plane to Beijing to search for her husband after her “Taiwan compatriot travel document” was canceled by the Chinese government.

Lee approached a Taiwan Taoyuan International Airport check-in counter with a crowd of supporters only to be stopped from boarding her plane. Taiwanese are required to present the permit, which is issued by Chinese authorities, when traveling to China.

“I am surprised, shocked and saddened,” Lee Ching-yu said. “I am just a weak female trying to travel to visit my husband; why is there any need for China to show such force?”

She added that the Chinese government’s action showed that there was a “political scheme” behind her husband’s arrest, who disappeared after entering Guangzhou from Macau last month.

China’s Taiwan Affairs Office on Sunday said it had forwarded Lee Ching-yu a letter from her husband based on “humanitarian considerations.”

Lee Ching-yu yesterday said she had only received a photocopy of a letter in her husband’s handwriting, adding that the actions of a Taiwanese man named Lee Chun-min （李俊敏）, who is acting as a go-between for the Chinese government, belied any “humanitarian” purpose.

“Lee Chun-min threatened, cajoled and sought to intimidate me,” she said, adding that she was told that refusing to give up her trip to Beijing would result in her husband’s confession being broadcast on Chinese state media, but her cooperation would secure his quick release.

She showed a hand-written promissory note purportedly signed by Lee Chun-min promising to work to prevent the confession video from being broadcast and to work to reunite her with her husband as soon as possible.

Lee Ching-yu said she rejected the offer, because it reflected an unacceptable cross-strait “brokerage culture” of privately resolving cases rather than following government channels.

“I cannot sacrifice the honor of the Republic of China for the sake of my husband,” she said.

“This case has already become a public incident which has to be resolved via public channels,” said Cheng Hsiu-chuan （鄭秀娟）, president of the Wenshan Community College where Lee Ming-che taught. “Chinese security agencies informed our government that Lee Ching-yu’s travel permit had been canceled. Why can the Taiwan Affairs Office not interact with us directly on the case?”

While family members and lawyers have the right to visit detainees under the Cross-Strait Joint Crime-Fighting and Judicial Mutual Assistance Agreement （海峽兩岸共同打擊犯罪及司法互助協議）, China suspended its implementation of the agreement when President Tsai Ing-wen （蔡英文） took office last year, refusing to provide information on Lee Ming-che’s case despite repeated requests by the Straits Exchange Foundation.

Separately yesterday, Lee Chun-min issued a statement, acknowledging that he had contacted Lee Ching-yu on behalf of the Association for Relations Across the Taiwan Straits, and accusing her of “stigmatizing” his efforts.

“I clearly told Lee Ching-yu that establishing a good negotiating environment was necessary to help her husband and therefore it would be necessary to stop antagonistic activities before we could begin helping him,” he said, adding that he made the statement after Lee Ching-yu asked for his advice.

He has no choice but to withdraw from the case now that his identity has been exposed, he said.

A former intelligence officer, Lee Chun-min was previously imprisoned in China for decades after being caught on a mission and later served as an aide to KMT Central Policy Committee director Alex Tsai （蔡正元）.

Alex Tsai yesterday denied that he had any connection with the Chinese government’s efforts to contact Lee Ming-che’s family members, but acknowledged that he knew that a “friend” had passed on a letter.