《中英對照讀新聞》She stabbed her husband as he raped her. A court sentenced her to death — 她刺殺性侵她的丈夫，法院判她死刑 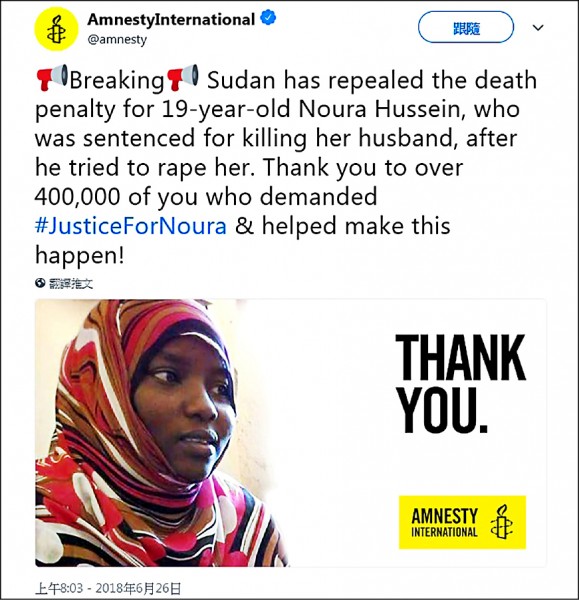 A 19-year-old Sudanese woman has been sentenced to death for fatally stabbing the man she was forced to marry, who she says raped her as his relatives held her down.

Hussein’s supporters filled the courtroom in Omdurman, Sudan, and overflowed into the hall outside as the judge announced the death penalty on Thursday. Her husband’s family refused an option to pardon her and rejected financial compensation, requesting that she be executed instead.

Forced to marry at 15, Hussein ran away from home and sought refuge with her aunt for three years. She was tricked into returning by her father, who handed her over to her husband’s family.

After Hussein refused to consummate the marriage, her husband’s relatives held her down while he raped her.

hold someone or something down：片語動詞，把…按住；使…無法動彈。例句：The suspect was struggling so much it took three officers to hold him down.（嫌犯拚命掙扎，得靠3名員警才能壓制住。）

shine a spotlight on（someone or something）：慣用語，聚焦於。例句：Her speech shone a spotlight on the urgency for government to improve transportation infrastructure across the nation.（她的演說讓各界聚焦於政府改善全國交通基礎建設的迫切性。）