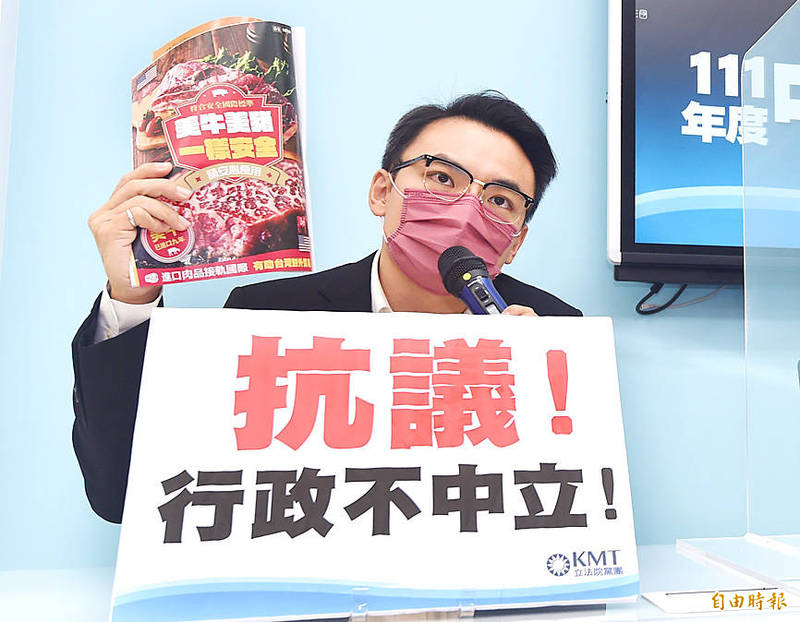 Hung was among those speaking at the KMT legislative caucus’ morning press conference.

Other lawmakers accused Hung of contravening quarantine regulations, which require people who have returned from overseas to monitor their health and avoid visiting crowded places for seven days after they have completed 14 days of quarantine.

They aimed to test whether countries would be willing to engage with them on the sidelines of the UN climate summit.

The two legislators returned to Taiwan on Nov. 12, so they would have been required to undergo quarantine at a hotel for two weeks until Friday last week, and then monitor their health for seven days until Friday.

“It was a shock to see Hung Meng-kai showing up at the KMT news conference, and then also head to the legislative committee meeting sessions,” Hung Sun-han wrote in a post online.

“When under seven days of self-health monitoring, CECC regulations clearly state [that one should] avoid places where people gather and where social distancing cannot be maintained,” he said.

“KMT Legislator Hung seems to have knowingly contravened the regulations,” Hung Sun-han said, adding that he could have created a potential threat “in our battle to contain the COVID-19 situation.”

“The UK has just recently found people infected with the new [SARS-CoV-2] variant Omicron. Hung Meng-kai would know about this, so why did he willingly break CECC rules? It is ironic to see that he wrote messages a few days ago, stating that he would strictly obey the self-health monitoring requirement,” he said.

“Then we see him moving about in the legislature, which has several thousand people coming and going each day, and they might have children and elderly [relatives] at home,” he said. “This KMT lawmaker … has no regard for ... other people’s health.”

Asked about the incident at a legislative committee meeting, Deputy Minister of the Interior Chen Tsung-yen （陳宗彥）, who is also the deputy head of the CECC, confirmed that when monitoring their health after quarantine, people should avoid crowded public spaces if social distancing cannot be maintained.

Everyone should comply with these regulations, although there could be special cases that must be reviewed on an individual basis, Chen said.

DPP Legislator Wang Mei-hui （王美惠） said that two lawmakers had returned from the COP26 summit, but “one of them is at home, still doing the self-health monitoring, but we see this other legislator appearing at the legislature.”

“We ask CECC to do something about such breaches,” Wang added.