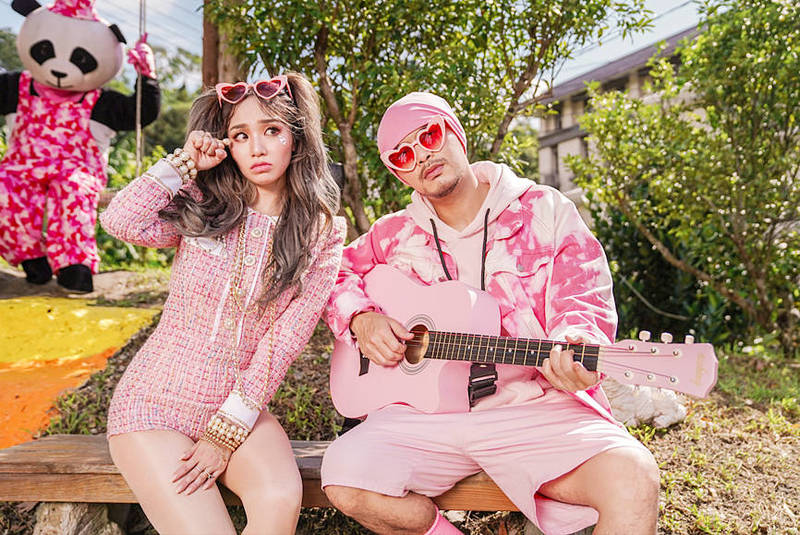 Banned from China’s airwaves and wiped from its Internet, the worst of his critics like to portray Malaysian rapper Namewee’s （黃明志） song Fragile （玻璃心） with Australian singer Kimberley Chen （陳芳語） as vehement anti-Beijing propaganda.

Conversely, the song’s perceived slights at Chinese nationalists have also made it a huge hit in Hong Kong and Taiwan.

Yet Namewee told the Central News Agency and Taiwan+ in an interview in Taipei that the song, like all of his work, is inspired by a desire to express rather than to offend.

“I think creativity shouldn’t be limited, because we are musicians. To me, I created a bittersweet love song that is catchy. I guess the lyrics were interpreted differently by different people. That is the magic of the song,” Namewee said.

Since its release on Oct. 15, Fragile has racked up more than 30 million views on YouTube — and also drawn the ire of Chinese nationalists.

The song’s lyrical undertones, with veiled references to a possessive “pink” other-half, are considered by some to be an intolerable dig at the Chinese government and, more specifically, its army of keyboard warriors.

However, Namewee said that there is “no beef” — especially not one borne out of his own dashed dreams of a career in China.

“When people accuse me of writing songs bashing China because I failed to launch a career there, that is false. I have never initiated one in China. I have always done things on the Internet and elsewhere,” he said.

Namewee said that he had held meetings with several agencies in China, even telling them that he was open to releasing localized versions of his work that would placate the country’s censors.

However, it was the insistence that even his international releases adhere to Beijing’s standards that proved a deal breaker, the rapper said.

“The agencies said all my creations, my lyrics, would have to be scrutinized and inspected. I realized this would affect the original intentions of my work,” he said.

“So, out of respect for them, I said we shouldn’t work together. That way, they won’t affect my work and I won’t affect theirs,” he added.

This pursuit of unbound expression is a universal understanding shared by his peers in China, if not by his detractors, Namewee said.

“I seldom use WeChat, but I do have some work partners in China, and they have a huge chat group where they say things like: ‘Hey, that song you wrote, that one we can’t type about, I just want you to know it is good.’ They have to say that because if they typed out the name of the song, then WeChat inspects it. Praise from people in the same field, that’s the honest truth,” he said.

While Fragile is not the first of Namewee’s works to court controversy — his song Oh My God and film Babi, among others, have created public relations and legal headaches for him in Malaysia — he emphasizes that his creations are meant to “tell people that such [social] problems exists.”

His propensity to push the envelope began when he was a child.

“I’ve always been a rebellious child. Not rebellious per se, just not a good follower of rules,” he said.

“I have the tendency to want to find out for myself if what I have been told is correct,” he added.

However, as an adult, Namewee said that it has not been his intention to deliberately stir up problems.

“Many people think I like to step on people’s toes, but to me, the more sensitive something is deemed, like the issue of race, the more it should be explored and discussed because there is a reason why something is sensitive, and if we don’t question it, then the underlying problems will never be resolved,” he said.

A graduate of Ming Chuan University in Taipei, Namewee splits his time between Taiwan and Malaysia.

“Taiwan, to me, is where I present my work. But in truth, I release them online anyway, so the whole world can see. That is why my works feature artists from different countries, like Vietnam, Thailand, Japan, India, Hong Kong, and a lot of others,” Namewee said.

It is the breathing space provided for universal notions of creative expression, rather than an affinity for place or culture, that has seen Namewee base his career out of Taiwan.

“Honestly you can create anywhere, but when it comes to releasing work, Taiwan is a place where I can properly do what I intend to do with my work. It is more tolerant,” he said.

“Take my song Ghost Island （鬼島）, for example, in which I made fun of and criticized certain things about Taiwan. In other countries, I might be given a hard time, banned, removed, excommunicado even. But here? I was nominated for Song of the Year at the Golden Melody Awards,” he said.

“I feel that we as humans need mutual understanding and interaction,” he added.

From 2013 to last year, Namewee released seven Asia-themed albums featuring various Chinese dialects and other languages from the continent.

Namewee’s inspiration to create the discography was largely due to a documentary project he embarked on in 2009.

For a while, the rapper made extended stays in other countries en route to his home, planning a return to Malaysia’s capital scheduled to coincide with the nation’s Independence Day.

“The reason I was able to make seven albums based on Asia is because I used to be a backpacker,” Namewee said. “I visited 20 to 30 countries for prolonged stays, not like just a day or two of touring. I tried to blend into the cultures.”

“Like, I was in the Philippines for two weeks, and I was in Mongolia for half a month, in the middle of the grasslands, where I spent time with the people there and got to understand how they see the world. It is running around Asia all those years that inspired me to make the Asia discography.”

Despite his success with Fragile, Namewee said that he does not have a plan mapped out for total music industry domination.

Instead, the rapper said that he intends to explore other countries and cultures through music, film and even writing, aiming to create artistic works that focus on similarities instead of their differences.

“I feel that I want to use my music to bring everyone together. In the past, it was just pure fun. But now, it’s safe to say that this is a distinguished feature of mine,” Namewee said.