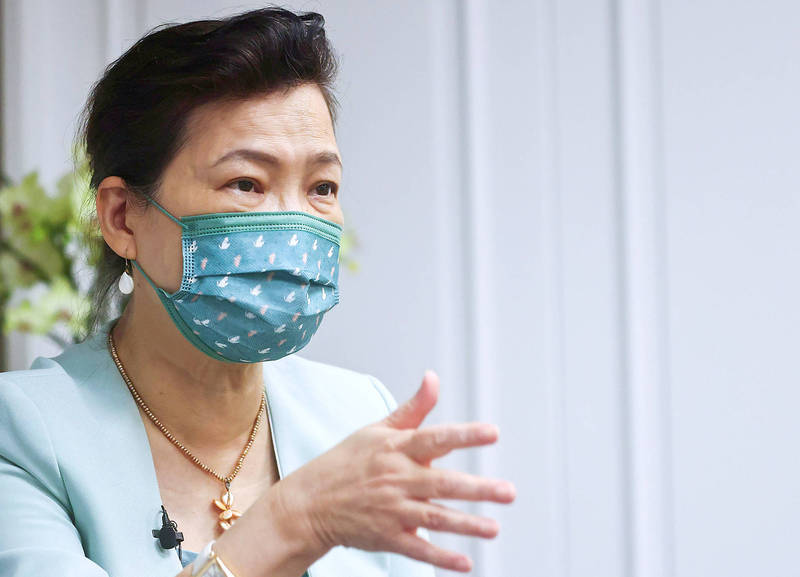 Peace in the Taiwan Strait is key to Taiwan’s ability to ensure a continuous supply of the chips needed to power a wide range of products from vehicles to smartphones, Minister of Economic Affairs Wang Mei-hua （王美花） said.

Taipei is seeking to rally political support as China ramps up its aggression toward Taiwan. Chinese warplanes made a record 93 flights close to Taiwan over a three-day period starting on Friday, prompting the US Department of State to express concern and urge China to cease its “provocative” actions.

“Taiwan has helped foster a great chip manufacturing ecosystem with three decades of efforts against the backdrop of globalization,” Wang said in an interview on Friday last week. “The global community should take Taiwan’s security more seriously so Taiwan can continue to provide stable service to everyone and be a very good partner to everyone.”

Wang’s comments highlight the increasingly politicized nature of semiconductors as governments around the world scramble to secure sufficient chips from Taiwan to accelerate an economic rebound post-COVID-19.

Taiwan Semiconductor Manufacturing Co （TSMC, 台積電） boasts a 53 percent share of the contract chipmaking market, fueling concern that any instability in the Taiwan Strait could cut off supply of chips used by hundreds of companies. TSMC chairman Mark Liu （劉德音） in July also called for peace in the region to prevent disruptions to the supply chain.

The heavy reliance on TSMC and its local peers has spurred governments in the US, the EU, Japan and China to mull bolstering their own domestic chip industries. US President Joe Biden’s administration last month stepped up pressure on companies to disclose details of their supply-and-demand structures, as the global chip shortage continued to wreak havoc on many industries, including automaking.

Intel Corp CEO Pat Gelsinger said that the US government should prioritize support to domestic US chipmakers, characterizing foreign supply chains as “insecure.”

Wang dismissed concerns that companies around the world are too dependent on Taiwan, saying that the country focuses mostly on chip fabrication within the complex global semiconductor supply chain.

It still needs equipment and materials from other countries, such as gear from US-based Applied Materials Inc and the Netherlands’ ASML Holding NV, which has a monopoly on extreme ultraviolet （EUV） lithography systems required for manufacturing the most cutting-edge chips, she said.

“We can buy EUV machines only from ASML. Are we going to say that it is too risky for us to be so dependent on ASML?” Wang said. “Taiwan has built a professional and reliable ecosystem over a long period of time, so many chip designers end up getting Taiwan to make the chips. It is really because Taiwan has a very efficient production system. Taiwan actually grows and thrives together with global equipment and material suppliers.”

Taiwanese chipmakers are already doing their part to alleviate shortages plaguing the global automotive industry, she said, with TSMC boosting output of automotive microcontrollers by 60 percent from last year. It is also spending US$100 billion to expand manufacturing over three years.

However, chip packaging and testing services in Malaysia have been affected by lockdowns, and that is causing the current bottleneck in supply, she said.

TSMC produces a significant portion of the semiconductors needed by major auto chip suppliers such as Infineon Technologies AG, NXP Semiconductors NV and Japan’s Renesas Electronics Corp, companies that automakers around the world depend on for essential electronic components for their vehicles.

To mitigate US national security concerns, TSMC is building a US$12 billion plant in Arizona with the goal of starting production by 2024. The company is also considering building a fab in Japan and studying the feasibility of a creating a plant in Germany. It is also adding capacity in a fab in Nanjing, China.

At home, the Taiwanese government is making efforts to provide TSMC with adequate water and electricity supply in anticipation of the chipmaker’s future needs, Wang said.

“The chip industry has propped up Taiwan’s economy. It is a key pillar to Taiwan’s economic security and overall security,” Wang said. “We are working hard to ensure that Taiwan will continue to be a reliable partner for everyone to collaborate with.”