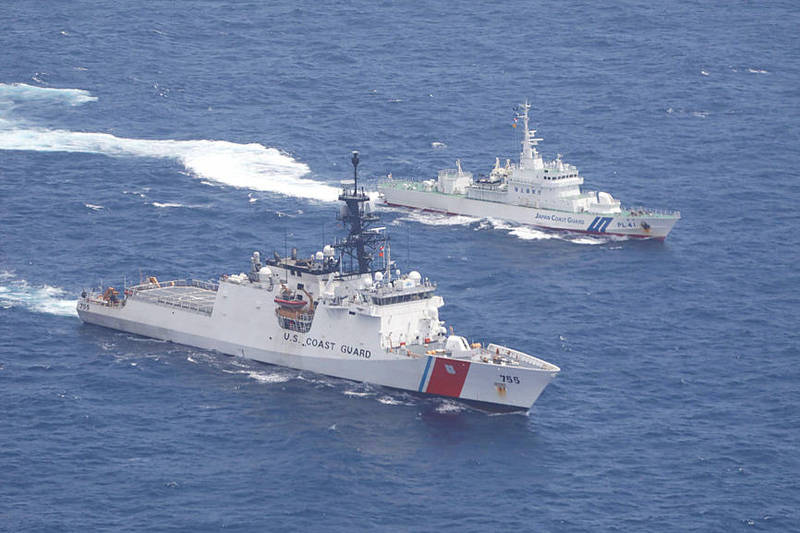 ‘NORMAL’: The passage showed that the US Coast Guard is engaged in joint training to bolster partner nations in the face of Chinese encroachment, a maritime expert said

A US warship and a US Coast Guard cutter on Friday sailed through the Taiwan Strait, making the eighth transit under the administration of US President Joe Biden since he took office in January.

The passage comes amid a spike in military activity by China, and follows Chinese assault drills last week, with warships and fighter jets exercising off Taiwan to the southwest and southeast.

The USS Kidd, an Arleigh Burke-class guided-missile destroyer, accompanied by the USCGC Munro, transited “through international waters in accordance with international law,” the US Navy said in a statement.

“The ships’ lawful transit through the Taiwan Strait demonstrates the US commitment to a free and open Indo-Pacific. The United States military flies, sails and operates anywhere international law allows,” it said.

In Taipei, the Ministry of National Defense yesterday confirmed the transit of the two US ships through the Strait, one sailing south to north and the other north to south.

It monitored the transit via joint intelligence, surveillance and reconnaissance tools, the ministry said.

It also described the situation as “normal.”

China yesterday called the move “provocative,” saying that the Chinese People’s Liberation Army Eastern Theater Command organized troops to follow, monitor and guard the course of the US ships’ operations.

Taiwan and the US in March signed an agreement establishing a coast guard working group to coordinate policy, following China’s passing of a law that allows its coast guard to fire on foreign vessels.

Before Friday’s transit, the Arleigh Burke-class guided-missile destroyer USS Benfold sailed through the Strait on July 28.

Friday was not the first time a US Coast Guard cutter has sailed through the Strait, but it was a reminder that the force is keeping vessels in the region and “engaging in more joint training and law enforcement diplomacy to help strengthen partner nation capacity vis-a-vis Chinese encroachments,” said Greg Poling, a maritime security expert at Washington’s Center for Strategic and International Studies.