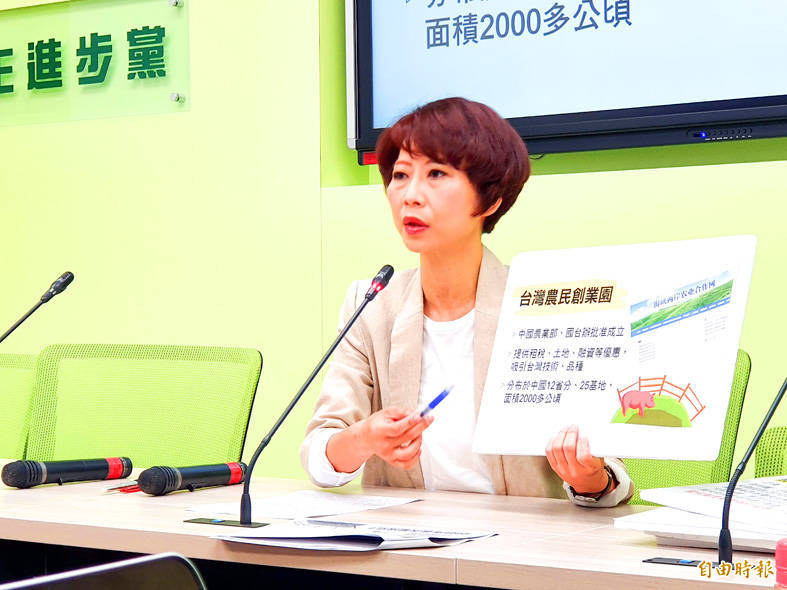 After China on Friday last week abruptly announced that starting from Monday it would suspend imports of pineapples from Taiwan, Chen on Tuesday said the ban was a result of the KMT working with China.

At a news conference in Taipei yesterday, Chen said that the flow of farming and fruit production knowledge from Taiwan to China was facilitated by KMT officials, and had intensified during former president Ma Ying-jeou’s （馬英九） administration from 2008 to 2016.

Under Ma’s administration, the pioneer park expanded from four to 25 sites across 12 provinces, she said.

Sun took Chen Bao-ji on numerous trips to visit the sites and provide consultation, she added.

In addition to golden diamond pineapples developed by the Taiwan Agricultural Research Institute in 1998, KMT figures have passed on other Taiwanese-cultivated and refined fruits to China, including mangoes, dragon fruits and black pearl wax apples, she said.

By contrast, President Tsai Ing-wen’s （蔡英文） administration has been working to diversify agricultural sales by exploring new markets, he said.

While the public is concerned about the effects of China’s abrupt pineapple ban, the government should consider if it could take legal action to prevent similar incidents from occurring, Lo said.

Chen Bao-ji yesterday said that Chen Ting-fei should specify which species and techniques he had helped export to China.

Regarding the pineapple ban, he said that the issue should not be politicized, but treated as related to biosafety and trade negotiations.

Chen Ting-fei should not attack Sun, who served as an ambassador-at-large during the administration of former president Chen Shui-bian （陳水扁）, he added.

The KMT on Wednesday wrote on Facebook that there was no evidence to support Chen Ting-fei’s claims, calling it a smear campaign.

Citing a 2005 news report, the KMT said that a Mainland Affairs Council report at the time had shown that the nation’s agricultural technology was flowing to China during Chen Shui-bian’s administration.

The KMT added that the government had taken action during Ma’s administration to protect Taiwanese agricultural technology, including the establishment in 2011 of an agricultural intellectual property rights council.