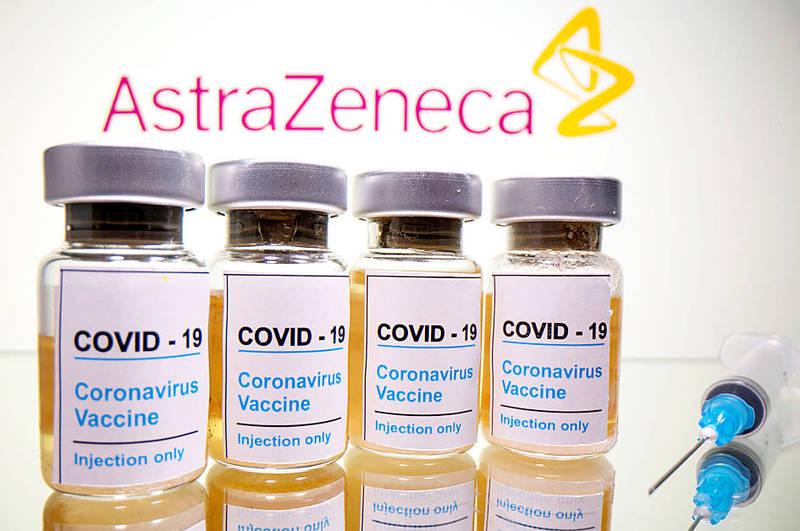 Vials of the Oxford-AstraZeneca vaccine are pictured in an illustration on Oct. 31 last year. Photo: Reuters

FALLING INTO PLACE: The Central Epidemic Control Center said that, based on the COVAX list, 200,000 doses of the Oxford-AstraZeneca vaccine should be arriving soon

Starting next month, all 332,000 medical personnel nationwide are to have priority access to COVID-19 shots, Centers for Disease Control Deputy Director-General Chuang Jen-hsiang （莊人祥）, who is spokesman for the Central Epidemic Control Center （CECC）, said yesterday.

Based on the COVID-19 Vaccines Global Access （COVAX） list, 200,000 doses of the Oxford-AstraZeneca vaccine should arrive as early as next week, the center said.

Chuang said that about 140,000 people — including central and local government officials who oversee disease prevention, personnel who have first contact with potential COVID-19 patients and Customs Administration personnel — are second in line to receive the vaccine.

Third in line are about 90,000 officers in the police and military police, and others who work to maintain order in society, he said.

Fourth in line are about 158,000 social welfare workers, workers at daycare facilities for elderly people and employees of the Long-Term Care program, while about 200,000 military personnel are fifth, he said.

Local governments and hospitals are teaming up to develop a preregistration system, he said.

Coming to Taiwan to work on a fishing vessel, an Indonesian in his 20s entered the nation on Feb. 4, Minister of Health and Welfare Chen Shih-chung （陳時中）, who heads the center, told a news briefing in Taipei.

As required, the man provided a negative COVID-19 test result prior to his flight and quarantined at a government-designated facility upon his arrival, Chen added.

The man was tested for COVID-19 on Wednesday and the result returned positive yesterday, Chen said, adding that he was asymptomatic.

On Thursday, a research team at National Tsing Hua University （NTHU） announced that it has developed a rapid test for determining a vaccinated person’s level of protection against COVID-19.

Like with a blood-glucose meter, people can take the test seven to 10 days after receiving their first COVID-19 vaccine shot, Cheng said.

Two lines on the tester means that the vaccine has produced a sufficient amount of neutralizing antibodies, while one line means that it has not, he said.

Unfortunately, as with experiences with other types of vaccines, Cheng said there is still no definitive answer as to the level of protection, as each person has a different reaction to a vaccine.

Of Taiwan’s 941 COVID-19 cases, 825 have been classified as imported. Nine people have died, while 888 have recovered and 44 remain in hospital, CECC data showed.