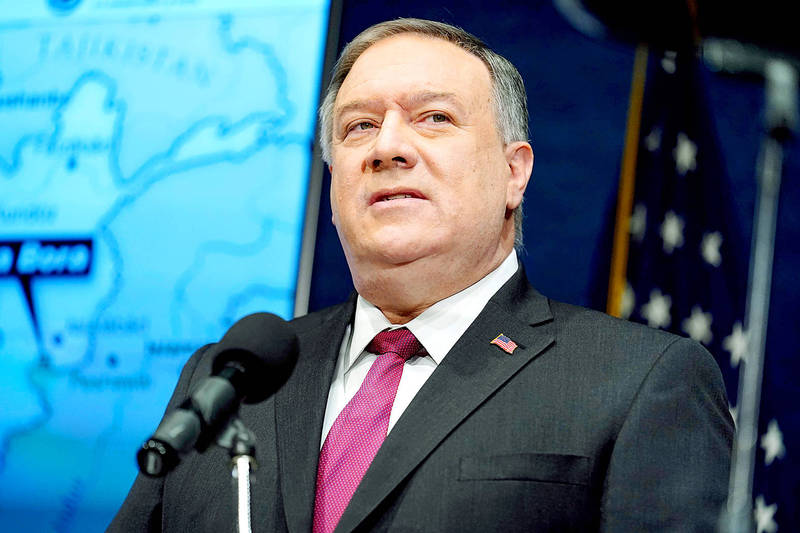 PARTING SHOT: The incoming secretary of state backed Michael Pompeo’s assertions, while Beijing said that he is a ‘doomsday clown’ and the designation worthless

On his last full day as US secretary of state on Tuesday, Mike Pompeo designated China’s crackdown on Uighurs and other minorities in Xinjiang as “genocide,” a condemnation that was endorsed by the nominee to replace him.

“I believe this genocide is ongoing, and that we are witnessing the systematic attempt to destroy Uighurs by the Chinese party-state,” Pompeo said in a statement.

China’s leaders “have made clear that they are engaged in the forced assimilation and eventual erasure of a vulnerable ethnic and religious minority group,” he said.

Pompeo cited sterilizations, indefinite detention and forced labor in Xinjiang, and called on “relevant judicial bodies” to hold those responsible to account.

The administration of former US president Donald Trump has repeatedly leveled sanctions on China over its treatment of Uighurs, and the designation had been widely expected.

The Chinese embassy in Washington denounced the move as a “gross interference in China’s internal affairs, and a serious violation of international law and basic norms” of international relations.

“The Chinese side expresses its strong concern and firm opposition to it,” the embassy said.

The Chinese Ministry of Foreign Affairs yesterday described Pompeo as a “doomsday clown” and said his designation was merely “a piece of wastepaper.”

The allegations of abuses against Muslim minority groups in Xinjiang are “outright sensational pseudo-propositions and a malicious farce concocted by individual anti-China and anti-communist forces represented by Pompeo,” ministry spokeswoman Hua Chunying （華春瑩） told reporters at a daily briefing.

“In our view, Pompeo’s so-called designation is a piece of wastepaper. This American politician, who is notorious for lying and deceiving, is turning himself into a doomsday clown and joke of the century with his last madness and lies of the century,” Hua said.