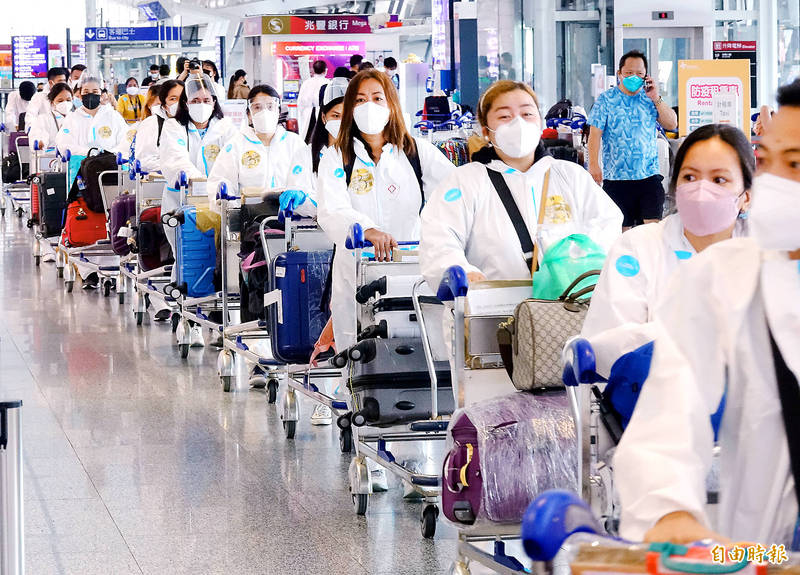 The cases arrived prior to the implementation of a shorter “3+4” quarantine requirement for arrivals on Wednesday, said Centers for Disease Control Deputy Director-General Philip Lo （羅一鈞）, the CECC’s acting spokesman and medical response division deputy head.

The cases brought the total number of people infected with the two new Omicron subvariants to 48, he said.

One of the cases with the BA.5 subvariant was an American boy younger than 10 who had traveled from the US, becoming the first case of either subvariant involving a child detected in Taiwan, he said.

The boy was unvaccinated and asymptomatic, and his polymerase chain reaction （PCR） test showed he had a cycle threshold value of 27, he added.

The eight BA.4 cases were arrivals from Australia, Chile, Thailand, the UK and the US, CECC data showed.

The CECC is closely monitoring the cases, while attempting to boost the national vaccination rate as the two strains are rapidly spreading in some countries, Lo said.

The CECC also reported 55,187 new local COVID-19 infections and 154 deaths from the disease, the 17th consecutive day of more than 100 deaths linked to COVID-19.

Yesterday’s deaths were aged from their 40s to 90s, including 144 people with chronic illnesses or other severe diseases, and 96 who had not received a booster shot, the CECC said.

Among the severe cases are two children, including a four-year-old girl with no prior underlying health issues, Lo said.

She was taken to a hospital emergency room on Tuesday after developing a fever and muscle spasms, he said, adding that she was intubated after having difficulty breathing and a computerized tomography scan showed she had cerebral edema.

She was diagnosed with encephalitis, admitted to an intensive care unit on Wednesday and is being treated with medication including the antiviral remdesivir, he said.

The other case is a seven-month-old boy, who also did not have any prior underlying health issues, he said.

The boy developed a fever on May 9 and the next day tested positive for COVID-19 in a PCR test in a hospital emergency room, Lo said.

The boy developed a cough and breathing issues on May 11, and was taken back to an emergency room where an X-ray showed he had pneumonia, Lo said, adding that the boy was intubated.

The child was treated with medication including remdesivir, taken off the ventilator on May 16 and discharged on May 22, he said.

Taiwan has recorded 21 cases of encephalitis in children aged 12 or younger, and 11 cases of pneumonia or bronchiolitis, he said.

Another case involved an 18-year-old man who had received three doses of a COVID-19 vaccine, Lo said.

The man sustained multiple injuries in a vehicle accident on June 5, including a collapsed lung and pelvic fractures, as well as injuries involving the aorta, liver and kidney, Lo said, adding that after being taken to hospital, rapid and PCR testing showed the man had COVID-19.

After surgery, the man’s conditioned improved and he is being treated in a hospital, Lo said.