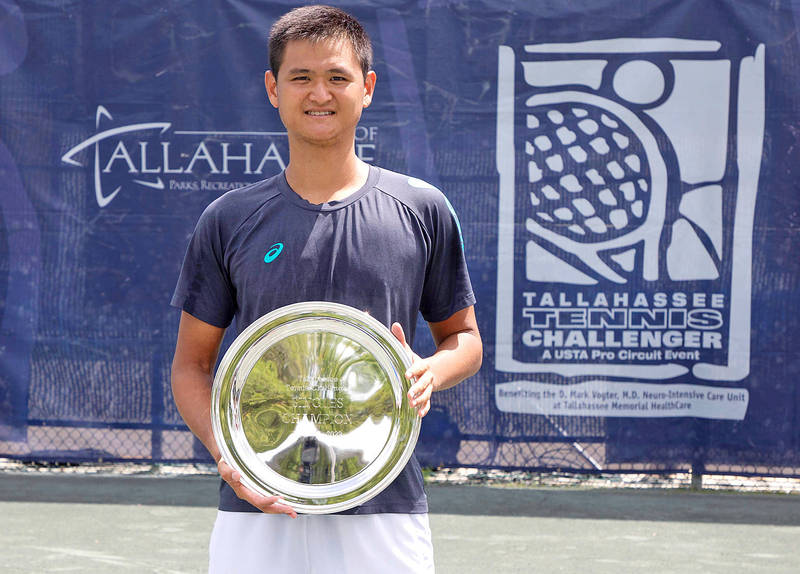 Wu Tung-lin made history on Sunday when he won the Tallahassee Tennis Challenger men’s singles final in Florida, becoming the first Taiwanese winner in the tournament’s 22 years.

Wu dominated Michael Mmoh of the US 6-3, 6-4 in their first professional matchup.

The Taiwanese said his fans at the Forest Meadows Tennis Complex powered him on to victory.

“I’m happy to do it here, with Taiwanese fans,” Wu said. “I heard the support from them and it gave me a lot of energy.”

Wu got off to a good 3-0 start over Mmoh, and maintained the lead to close the opening set 6-3.

The two players traded early breaks in the second set, but Wu jumped ahead 2-1 and never looked back, finishing out the set 6-4 on his second match point.

It was Wu’s first title on the ATP Challenger Tour, the second-highest tier of men’s international tennis competition.

World No. 1 Iga Swiatek on Sunday won her fourth consecutive WTA title this year as she swept aside Aryna Sabalenka in straight sets to claim the Porsche Tennis Grand Prix final in Stuttgart.

The 20-year-old Swiatek broke Sabalenka’s serve twice in the opening set, then greeted every point won with a clenched fist of celebration to seal a 6-2, 6-2 win.

“It was a tough match. We fought for every game. Hopefully, there will be many more to come,” Swiatek said.

She thanked her team for helping her recover in the short time between her semi-final win over Liudmila Samsonova, which lasted more than three hours.

“Thank you for giving me life again,” she said. “The atmosphere was amazing and it was great to see all the Polish flags. It’s such a huge support for us.”

World No. 1 Novak Djokovic’s barren title spell continued on Sunday as he went down 6-2, 6-7 （4）, 6-0 to Russian Andrey Rublev in the final of the Serbia Open in Belgrade.

Playing his second tournament on clay this season after being ousted by Alejandro Davidovich Fokina in Monte Carlo, Djokovic was off to a slow start as second seed Rublev broke him twice to win the opening set 6-2.

Djokovic, cheered on by a capacity home crowd, raised his game in the second set to take the tie breaker, despite earlier squandering five set points.

Rublev galloped to an early lead and closed out the match with a powerful forehand winner for his first win over Djokovic.

“It was unfortunate that in the third set I really ran out of gas,” Djokovic told reporters. “I couldn’t deliver more of a fight, but congratulations to Andrey on another great week.”

The 18-year-old Alcaraz saw off Carreno Busta in a swift 65 minutes.

The world No. 11 yesterday rose to No. 9, making him the youngest player to break into the top 10 since Rafael Nadal did it 17 years ago, also after the Barcelona Open.