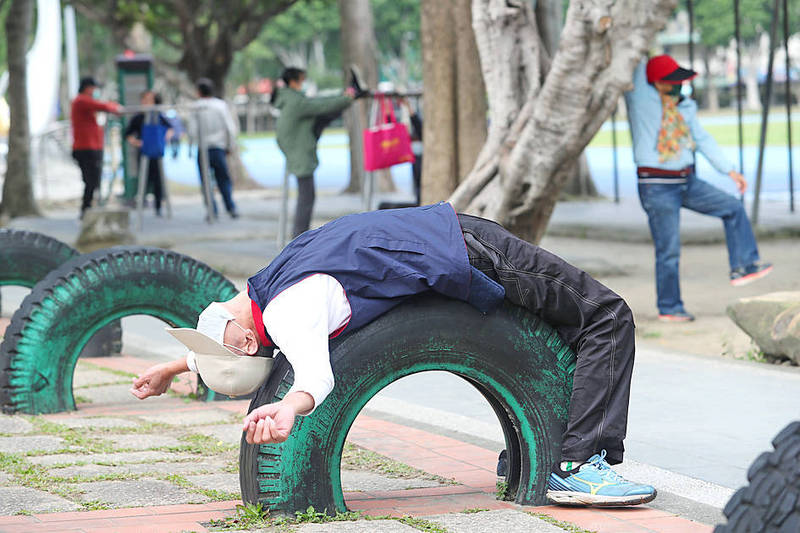 TRACING THE VIRUS: Genome sequencing shows that at least four different types of the Omicron variant of SARS-CoV-2, found in 39 cases, are in Taiwan, the CECC said

The domestic cases are eight males and three females, with two of them children under the age of five, the CECC said.

Two involved a man and his mother, who is friends with a member of the Golden Voice Social Club in Taoyuan who tested positive for COVID-19 on Friday last week, it said.

The mother was already in quarantine because of the spread of COVID-19 at the club, Minister of Health and Welfare Chen Shih-chung （陳時中）, who heads the center, told a news conference.

The new cases also include a man in his 30s, who is the husband of a worker at a factory in Taoyuan where five cases have been confirmed.

The remaining new local cases tested positive after they were listed as close contacts of 13 infected employees of a Union Bank of Taiwan （聯邦銀行） branch in Taoyuan’s Jhongli District （中壢）, the CECC said.

Two are family members of bank employees who are in quarantine, one is an employee’s friend, while three work at a steak house and two are children who ate at the restaurant at about the same time as several bank employees, the CECC said.

Five of the 11 domestic cases are breakthrough infections, one had a single dose of the AstraZeneca COVID-19 vaccine, three are unvaccinated — including the children who are not eligible for the vaccine — and the status of two people was still being investigated, the CECC said.

Genome sequencing showed that a nurse working in the COVID-19 ward of Taipei City Hospital’s Renai Branch, who was confirmed as having COVID-19 late on Wednesday, was infected with a different Omicron variant of SARS-CoV-2 from other domestic cases this year.

The four different types of Omicron found in 39 domestic cases show that there are four chains of the disease spreading in Taiwan, Chen said.

So far this year, Taiwan has recorded 72 domestic cases, all but six of whom are linked to Taiwan Taoyuan International Airport.

Chen said that he is confident that the current wave of infections can be contained, adding that the CECC is not considering a ban on banquets held by companies ahead of the Lunar New Year holiday.

Separately, Taipei Mayor Ko Wen-je （柯文哲） yesterday said that from today, all sports activities in the city, outdoors and indoors, must be conducted while wearing masks.

Drinking, swimming, visiting saunas or spas, or engaging in other water-based activities would be exempt, Ko said.

Referees and athletes are allowed to play without masks in official games if they have received their second COVID-19 vaccination at least 14 days prior, or have already taken a booster shot, he added.

A cleaner sanitizes the ticket vending machines at an MRT station in New Taipei City yesterday, as the city announced a tightening of COVID-19 disease prevention measures. Photo: CNA