《TAIPEI TIMES》 Japan, US ‘could not stand by’: Abe 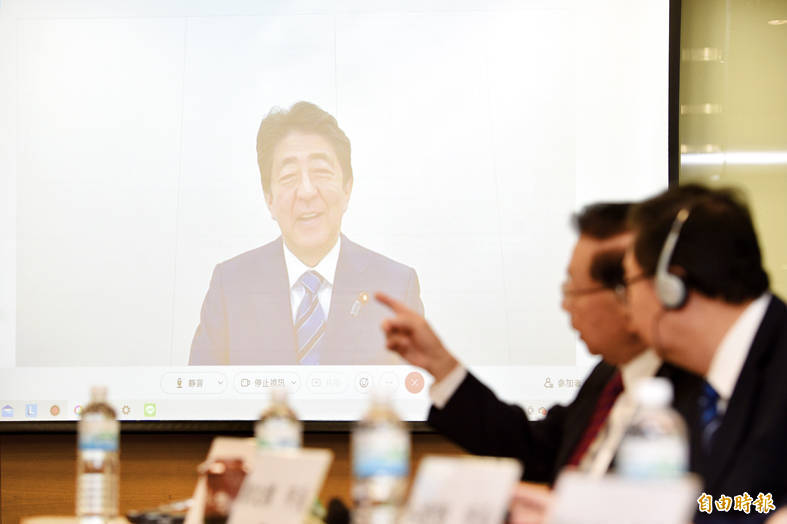 INVASION: Former Japanese prime minister Shinzo Abe said: ‘A Taiwan emergency is a Japanese emergency, and therefore an emergency for the Japan-US alliance’

Japan and the US could not stand by if China attacked Taiwan, and Beijing needs to understand this, former Japanese prime minister Shinzo Abe said yesterday.

Speaking virtually to a forum organized by Taiwanese think tank the Institute for National Policy Research, Abe said that the Senkaku Islands — known as the Diaoyutai Islands （釣魚台） in Taiwan — the Sakishima Islands and Yonaguni Island are only about 100km from Taiwan.

An invasion of Taiwan would be a grave danger to Japan, he said.

“A Taiwan emergency is a Japanese emergency, and therefore an emergency for the Japan-US alliance. People in Beijing, [Chinese] President Xi Jinping （習近平） in particular, should never have a misunderstanding in recognizing this,” Abe said.

Abe called on the democratic world to prevent a Chinese invasion by standing together and jointly urging Xi and the Chinese Communist Party “not to choose the wrong path.”

“A stronger Taiwan, a thriving Taiwan, and a Taiwan that guarantees freedom and human rights are also in Japan’s interests. Of course, this is also in the interest of the whole world,” Abe said.

A military action targeting Taiwan would also lead to “economic suicide” for China, despite it being one of the world’s top economies, and significantly affect the global economy given China’s close economic and trade ties with the rest of the world, he added.

That is why maintaining peace across the Taiwan Strait is in the interest of all parties involved, he said.

Abe reiterated his support for Taiwan’s bid to join the Tokyo-led international trade bloc, the Comprehensive and Progressive Agreement for Trans-Pacific Partnership （CPTPP）.

During his tenure as prime minister, Abe said he tried to expand Japan’s strategic economic, security and diplomatic standing in the world order, and saw the need to “firmly connect ourselves to a free and open democratic framework.”

“Based on the same idea, I support Taiwan’s participation in the TPP,” he said, using the CPTPP’s former name, the Trans-Pacific Partnership, to refer to the trade bloc.

“The role of the TPP in maintaining and strengthening the rules-based international order is important. Taiwan is more than qualified to participate,” he said.

“Beijing believes its own propaganda about Western frailties and underestimates Washington’s resolve. The risk of Chinese miscalculation through overconfidence is real,” Moore said, without mentioning Taiwan explicitly.

The MI6 head warned about the spread of Chinese surveillance technology, which he said was used in “targeting the Uighur population in Xinjiang,” and said the UK needed to recognize that “technologies of control are being increasingly exported to other governments.”

Moore said that “adapting to a world affected by the rise of China is the single-biggest priority for MI6.”