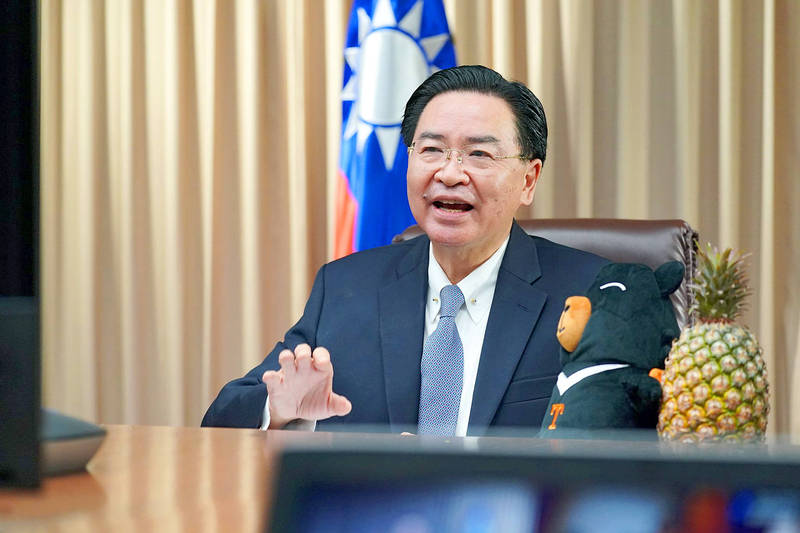 COUNTER-MEETING: The conference is to focus on leaders targeted by Beijing, with Tibet, Hong Kong and Uighur activists also invited, the inter-parliamentary alliance said

Minister of Foreign Affairs Joseph Wu （吳釗燮） has been invited by the Inter-Parliamentary Alliance on China, an international cross-party group of legislators, to its meeting in Rome on Friday next week, the alliance said on Monday.

“Representatives from the Inter-Parliamentary Alliance on China （IPAC） — a body of some 200 global parliamentarians — will gather in Rome to stage a counter-meeting ahead of the G20 Leaders Summit to demand a tougher stance towards the Chinese government,” the group said in a statement.

The Rome conference would be the first time that IPAC holds an in-person meeting since its launch in June last year, it said.

In Taipei, Ministry of Foreign Affairs spokeswoman Joanne Ou （歐江安） told a news briefing that the ministry is deliberating details about Wu’s visit to Europe, without confirming whether he would attend the meeting in person.

The ministry would share more information with the public once a decision is confirmed, Ou said.

IPAC is composed of the parliaments of 19 countries, spanning five continents and includes the European Parliament, she added.

It aims to promote cooperation among like-minded parliaments to push China to respect international regulations, global security and human rights through legislation, she said.

The alliance has repeatedly expressed its concern over Beijing’s verbal and military coercion of Taiwan, and its infringements on democracy, human rights and freedom, she said.

It has also voiced support for Taiwan to join the WHO and for Lithuania to develop ties with Taiwan by posting videos on Twitter, Ou said.

Aside from the meeting in Rome, Wu might attend a meeting in Prague on Wednesday and Thursday next week, according to a resolution passed by the Czech Parliament’s Committee on Foreign Affairs, Defense and Security last week.

However, the foreign ministry has yet to confirm Wu’s visit to the Czech Republic, although it has said Wu did receive an invitation from the country.

Meanwhile, a delegation of more than 65 people led by National Development Council Minister Kung Ming-hsin （龔明鑫） and Minister of Science and Technology Wu Tsung-tsong （吳政忠） is to visit Slovakia, the Czech Republic and Lithuania from today until Saturday next week.

Asked about media reports that a delegation from the European Parliament plans to visit Taiwan for discussions about disinformation next month, Ou said the ministry has no information to offer at present, but Taiwan would continue to deepen relations with the EU and its member states through various means.