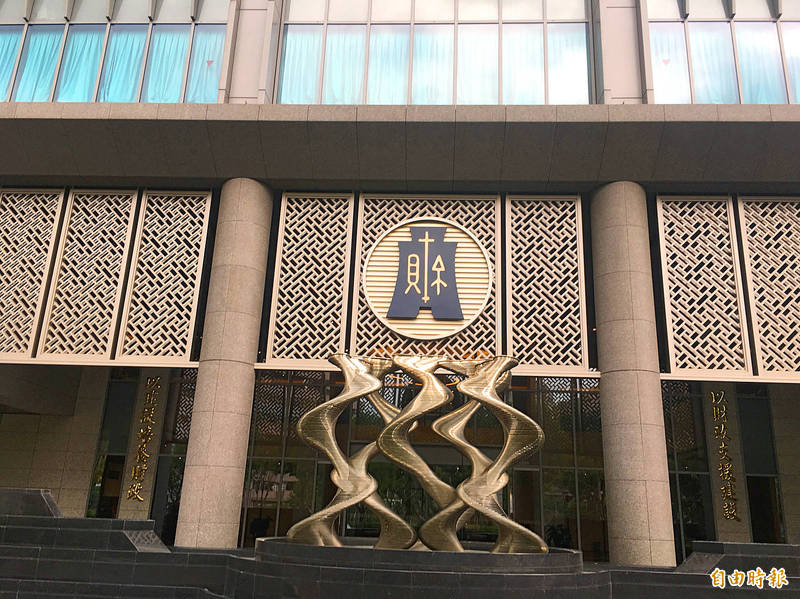 The Ministry of Finance logo is pictured on a building in Taipei in an undated photograph. Photo: Clare Cheng, Taipei Times

MONETARY ASSISTANCE: Billions of New Taiwan dollars in overseas funds continue to flow back to Taiwan’s shores, along with new jobs, with the help of incentive programs

The Ministry of Finance has received applications to repatriate NT$355.9 billion （US$12.83 billion） in overseas funds since a repatriation law took effect on Aug. 15, 2019, the ministry said at a weekly Cabinet meeting on Thursday.

The legislature passed the Act on the Use of and Taxation on Inward Remittances of Overseas Funds （境外資金匯回管理運用及課稅條例） in July 2019, as part of government incentives to help investors rebalance their management of global funds and encourage them to return capital to Taiwan.

Since the law was enacted, about NT$113.7 billion of repatriated funds were invested in local industries, mainly in the information and communications industry, and generated NT$25.5 billion in tax revenue, the ministry said.

The ministry said the US-China trade dispute and the COVID-19 pandemic have had repercussions on the global economy in the past few years.

“However, with full cooperation between the Ministry of Finance, the Ministry of Economic Affairs, the Financial Supervisory Commission and the central bank, the results of implementing the overseas funds repatriation law are in line with expectations and inject energy into the domestic economy,” it said.

Apart from the repatriation law, the return of Taiwanese manufacturers and policy efforts to facilitate domestic investment have also reignited Taiwan’s economy over the past two years, government officials and economists have said.

According to data from the Ministry of Economic Affairs’ three major investment incentive programs for overseas Taiwanese companies, the ministry had as of Friday approved applications from 1,002 companies for a combined NT$1.34 trillion since it launched the incentive programs in early 2019.

The investments are expected to create 113,775 jobs, the ministry said in a statement on Friday, after it had approved the plans of four more companies.

The programs, which provide participating companies with assistance for financing, taxation, land, utilities and labor, remain valid for one year as part of government efforts to assist overseas Taiwanese companies to reposition themselves in the global market and stimulate economic momentum, the ministry said.