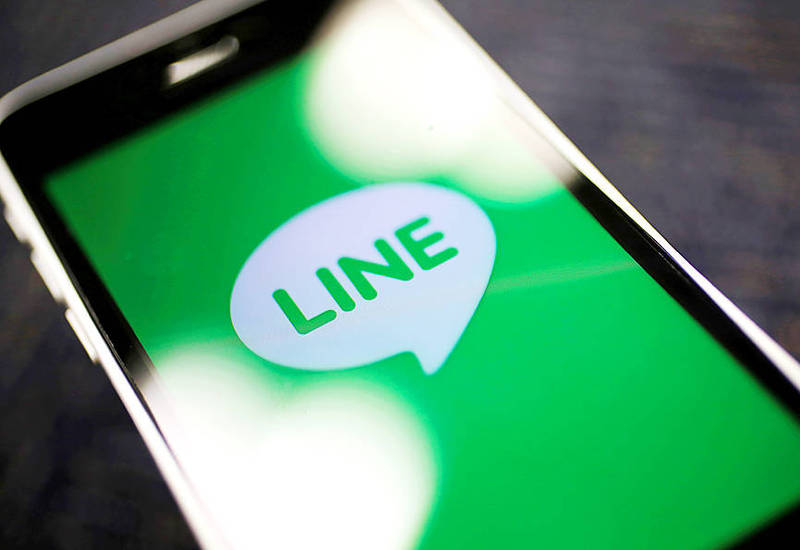 The logo of the mobile messaging app Line is displayed on a smartphone in a photograph taken in Tokyo on Sept. 23, 2014. Photo: Reuters

GOVERNMENT TARGETED? A report said Line found more than 100 targets at the Presidential Office, the Cabinet, the military, and local governments

An investigation has been launched by law enforcement authorities into a cyberattack targeting users in Taiwan of the mobile messaging app Line, the company said yesterday.

Line Corp confirmed a report that the accounts of some users in Taiwan had been hacked, but said in a statement that as soon as it detected abnormalities, it took the necessary measures to protect its users and reported the case to law enforcement.

It provided no other details, other than to say that data and information security, and user privacy are its top priorities, pledging that it would take the necessary measures to deal with the incident.

The Chinese-language Liberty Times （sister newspaper of the Taipei Times） yesterday reported that Line discovered content flowing out of the accounts of some users last week and took action to deal with the issue.

The company found that more than 100 people in the political sphere were targeted by the attack, including Cabinet and Presidential Office officials, military officers, local government officials and leaders of political parties, the report said.

The letter-sealing point-to-point encryption function of the targets’ accounts had been turned off, and the attack was very precise, indicating that professional hackers were behind it, the report added.

Judging from how the attack was carried out, hackers could have launched it using NSO Group’s Pegasus spyware, which is at the center of a global storm after a list of about 50,000 potential surveillance targets was leaked to rights groups.

Line did not give any details of the attack, such as the identity of the targets and how many were involved, saying that the investigation was ongoing.

Line advised all users to ensure that their letter-sealing function was switched on.

The Executive Yuan yesterday said that its staff had not received a Line message informing them that they had been hacked.

The Directorate-General of Personnel Administration said that staff do not use Line due to security concerns.

Separately, the Democratic Progressive Party said that the attack was most likely conducted by Chinese hackers, calling on the National Communications Commission and the Ministry of Justice to launch investigations.