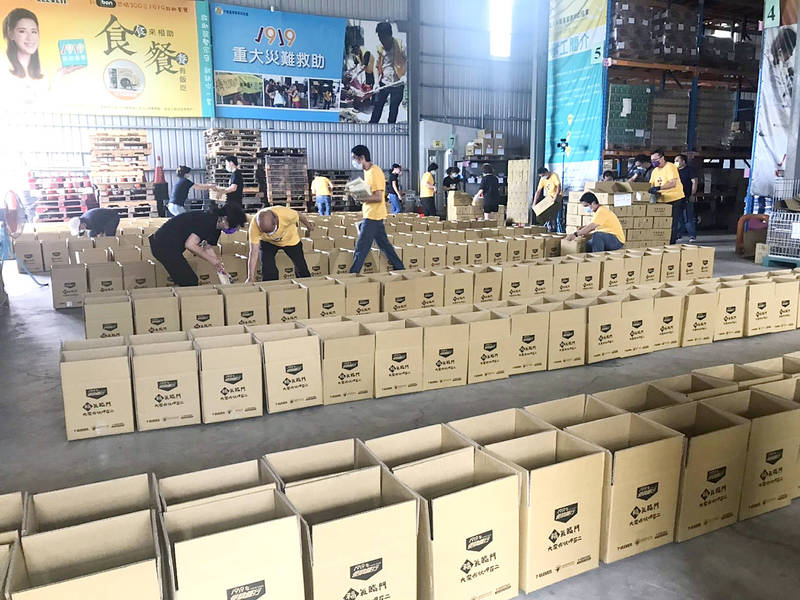 The Chinese Christian Relief Association yesterday called on people to join a fundraising campaign for delivering necessities to underprivileged families, as many are struggling during the COVID-19 outbreak.

After a level 3 COVID-19 alert was implemented nationwide on May 19, the association’s 1919 Food Bank, TSMC Charity Foundation, convenience store chain 7-Eleven and its Good Neighbor Foundation partnered to launch a digital fundraising campaign through 7-Eleven’s platforms.

The campaign funds food packages that contain rice, oil, dried noodles and canned food, with each package costing NT$300, the association said in a news release.

About 6,000 such packages have already been delivered to children in the association’s study assistance program, it said.

The association began accepting applications from other people from Tuesday last week, and plans to send out 4,000 packages containing food, noodles, masks and soap, it said.

More than 70 percent of the people who need help are unemployed due to COVID-19, while 19 percent of applications came from New Taipei City, data from the association’s 1919 Food Bank showed.

About 20 percent only have odd jobs and 16 percent have been receiving aid from social welfare institutions, while 14 percent were vendors or shopkeepers, or working in the food and beverage sector, the data showed.

The association said that a woman surnamed Su （蘇）, who has been living with her parents and two children in Tainan after getting divorced, used to work at an industrial plant during the day and had another part-time service job in the evening, while her father worked odd jobs.

However, Su lost her part-time job due to COVID-19 and her father lost his jobs, dealing another blow to an already fragile family livelihood, the association said.

Another woman grows honey peaches with her husband in Taoyuan’s Fusing District （復興）, a mountainous area known for peaches and tourist attractions, it said.

They usually rely on the revenue from harvests from May to July to feed a family of nine, it said.

The extended level 3 alert has affected their sales, as many logistics firms are too busy to transport their produce, the woman told the association.

They could do nothing but leave the peaches rot and feed some to the pigs, she said.

The association called on people to help such families in need by joining the fundraising campaign through 7-Eleven’s platforms or the association’s Web site.

The association said that people in need of assistance can apply at its offices nationwide, and would receive food packages soon after their applications are approved.