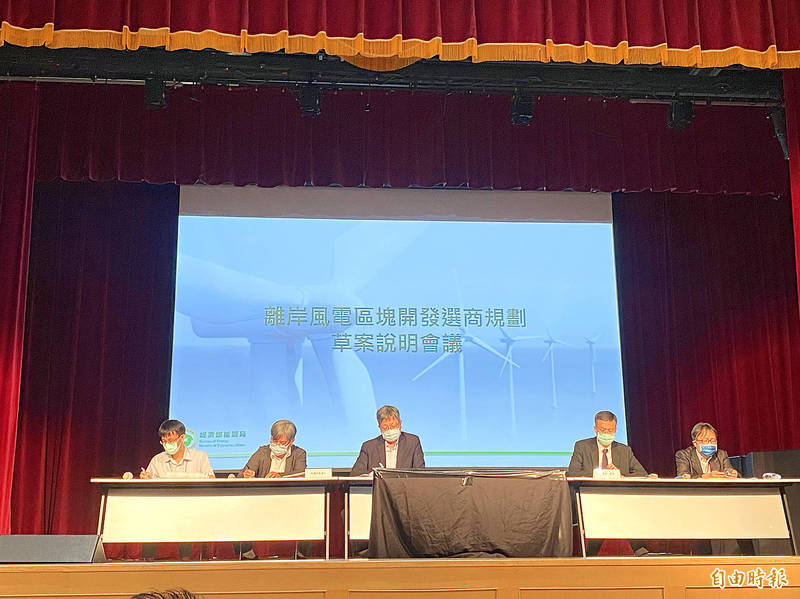 In the third phase of Taiwan’s offshore wind farm development plan, capacity is to be increased by 5 gigawatts （GW） from 2026 to 2035 to a total of 15GW, the Bureau of Energy （BOE） announced yesterday.

“It is up to the developers to compete for the best locations,” bureau Director Yu Chen-wei （游振偉） said as he presented draft regulations in Taipei.

“We leave it up to them to decide what technologies to deploy,” Yu added.

In the third phase, all developers must complete a two-stage process, in which they are first approved for technical competence, financial soundness and their level of localization before being allowed to bid against each other, it said.

The long-awaited draft regulations have made the government’s “local content requirement” more flexible, but the list of items that must be locally sourced is longer, the bureau said.

Even the “mandatory” list, which has 26 items, would allow developers to source as much as 40 percent from outside Taiwan, it said.

“Having been through the first two rounds of offshore wind farm development, we trust that our local suppliers have amassed a significant amount of experience,” Yu said. “If they are competitive in the international market, they should be able to win 100 percent of an order because they are the local supplier.”

The bureau said that more importantly, generators and sea cables — which had been contentious because of doubts that they could be economically and technically feasible to manufacture locally — have been switched from the mandatory list to the “optional” list.

“We haven’t seen concrete plans for investment in manufacturing these items,” said Lin Hua-yu （林華宇）, director of the metal and mechanical industries division of the Ministry of Economic Affairs.

“We have seen credible plans to manufacturer offshore wind substations, so they have been added to the mandatory list,” Lin added.

At the presentation, many local suppliers voiced concern that the local content requirements be weighed more heavily.

While the draft rules are not yet finalized, they came as a relief to many developers.

“I ask that the BOE make as few changes to the current draft rules as possible and that it release the final version soon,” JERA Energy Taiwan Co （台灣捷熱能源） senior development manager Candice Wang （王靖惠） said.

Developers said that they were eager to pin down the “rules,” because the application process for phase three projects opens in June next year and the environmental impact assessment for an offshore wind farm project takes at least one year.