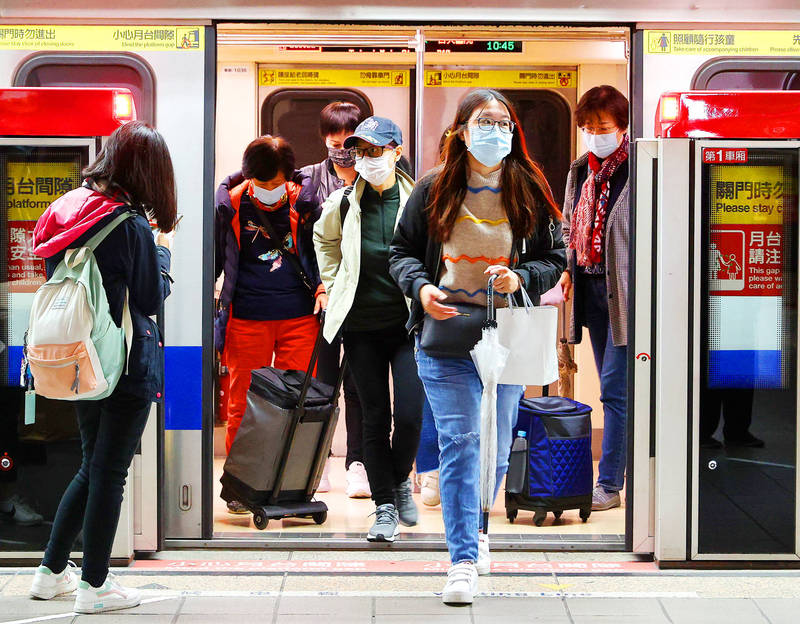 People who travel abroad and return within three days would not have to provide a COVID-19 polymerase chain reaction （PCR） test result prior to their departure for Taiwan, the Central Epidemic Command Center （CECC） said yesterday as it reported four new imported cases.

Under the center’s autumn-winter COVID-19 prevention measures that took effect yesterday, travelers arriving in Taiwan must provide a PCR test result issued within three days of their boarding a flight to Taiwan.

The center had previously said that travelers who met three conditions could return to Taiwan without a valid PCR test result, but they would have to sign an affidavit, would be assigned special seating on their flight and have to pay for a mandatory test upon arrival.

It said on Monday that people who had difficulty obtaining a PCR test result within the three-day period could return in the same way, but their affidavit would be subject to review and they could be fined if their reasons for not having a test result was found to be unreasonable.

Centers for Disease Control （CDC） Deputy Director-General Chuang Jen-hsiang （莊人祥）, who is also the CECC spokesman, yesterday said the CECC had decided to also exempt people who leave and return to Taiwan within three days from providing a PCR test result prior to their return.

They would need to sign an affidavit, accept special seating, pay for a PCR test upon arrival and undergo mandatory home quarantine for 14 days.

CECC Border Quarantine Division deputy head Ho Li-li （何麗莉） said that as of 2pm yesterday, there were only about 150 arriving passengers on five flights, and all of them had presented a PCR test result before boarding.

The CECC does not encourage people to intentionally avoid getting a PCR test before leaving for Taiwan, as they could face a fine for contravening regulations, but people who feel they meet the special conditions for exemption can download the affidavit template on the CDC’s Web site and present their statement at check-in before boarding, Ho said.

As for the new cases confirmed yesterday, Chuang said one was a Filipino in his 20s who arrived for work on Nov. 16, developed a runny nose on Friday last week and was tested on Sunday before ending centralized quarantine and received the result yesterday.

The second case is an Indonesian in her 30s who arrived for work on Saturday, but reported having symptoms since Nov. 21, he said.

She was tested at the airport and the result came out positive yesterday, so the 44 passengers who sat near her on her flight have been placed under home isolation, he said.

Case No. 679 is a Taiwanese in his 30s working in the UK, who developed fatigue, a runny nose and nose congestion on Oct. 26, sought treatment on Oct. 28 and tested positive for COVID-19, Chuang said.

The man lost his sense of smell and taste during a mandatory 10-day self-isolation in the UK, but felt that his symptoms disappeared by Nov. 7 when he completed his self-isolation, Chuang said.

The man returned to Taiwan on Saturday, and as he reported having had COVID-19, he was tested at the airport and the result was confirmed positive yesterday, Chuang said.

The man did not meet the criteria for Taiwanese infected with COVID-19 abroad to return home, so he could face a fine of up to NT$150,000, Chuang added.

The fourth case is a Belarusian man in his 40s who holds a residence permit, and returned to Taiwan on Nov. 13 after leaving in mid-October for a trip home, Chuang said, adding that his company arranged for him to be tested on Monday.