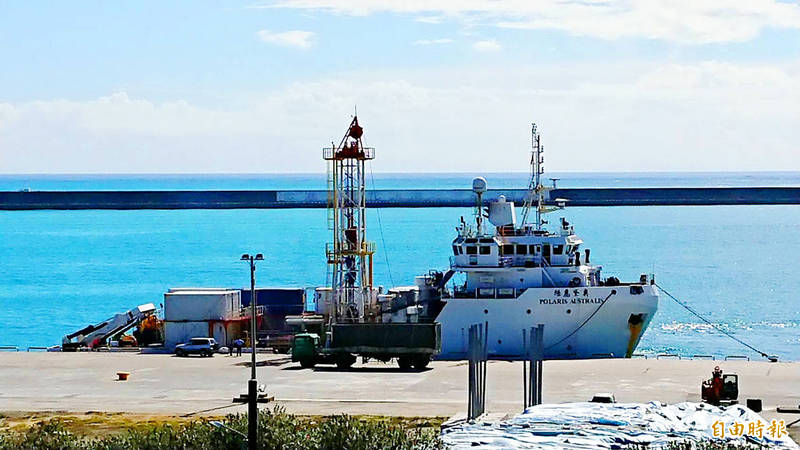 A drilling vessel waits in dock at the Port of Hualien in Hualien County yesterday, as it is fitted out to join the search for a missing F-16 pilot and plane. Photo: Yu Tai-lang, Taipei Times

One of eight signals from the flight data recorder of a missing F-16 jet, piloted by Colonel Chiang Cheng-chih （蔣正志）, was intercepted off the coast of Hualien County, Minister of National Defense Yen De-fa （嚴德發） told the Legislative Yuan yesterday.

The company was also commissioned to locate the F-5E jet that crashed into the sea off the coast of Taitung County on Oct. 29.

On Tuesday, Chiang took off from the Hualien Air Base at 6:05pm for a scheduled nighttime training exercise, but disappeared from radar screens two minutes later.

More than 25 airplanes and 34 vessels have been deployed in the search and rescue efforts, Yen said.

The ministry would like to thank the Executive Yuan’s Rescue Coordination Center, the Coast Guard Administration, the National Airborne Service Corps and the Hualien Fishers’ Association, he added.

The survey company’s vessel, the Polaris Australis, has arrived at the Port of Hualien and is expected to immediately begin searching along the east coast.

The ministry detected eight separate signals, thought to be from the F-16’s ejection seat and its fuselage, Yen told legislators on the sidelines of the meeting, adding that the ministry has forwarded the data to the survey company, which is to start searching in the area of the first signal, 9 nautical miles （17km） off the coast.

Dragon Prince CEO Hsi Shen-ming （奚慎明） declined to comment on details of the operation, citing a non-disclosure agreement with the air force.

Hsi would only say that the firm would work with the air force and follow the military’s instructions, as outlined in its contract.

On Tuesday night, a Chinese maritime research ship was detected off the coast of Hualien and Yilan counties, military personnel in Taitung said, on condition of anonymity.

The ministry condemned rumors online, reportedly spread by Chinese cyberwarfare units, that Chiang defected to the People’s Republic of China, landing his fighter jet in Xiamen.

“The rumors are repugnant and cheapen our professional soldiers’ faith in defending their nation,” the ministry said.

Military personnel stand at their posts and are diligent in their duty to safeguard the nation, the ministry added.