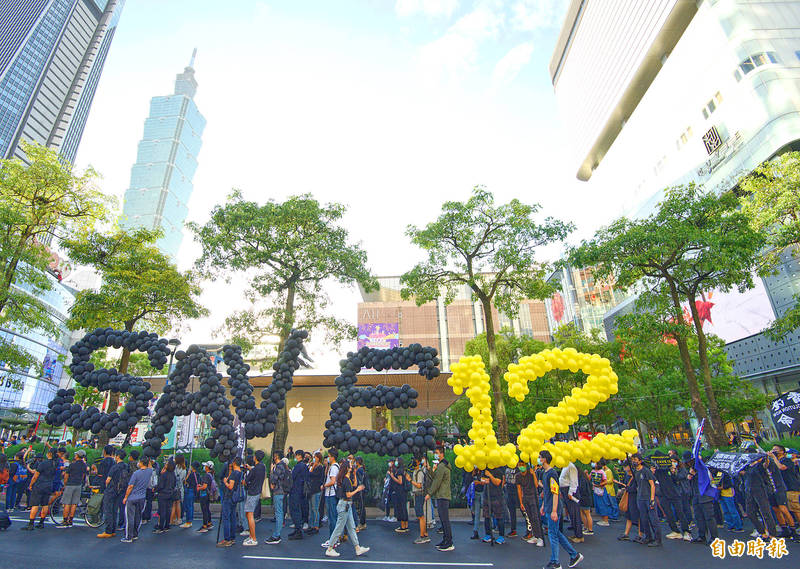 Protesters yesterday at a rally in Taipei carry balloons arranged to read “Save 12” as they call on China to release 12 detained Hong Kongers. Photo: Liu Hsin-de, Taipei Times

‘BRING THEM BACK’: Taiwan stands on the first line of defense against China’s authoritarianism and must stand with Hong Kong, the DPP’s Lin Fei-fan said at the rally

Thousands of people yesterday marched in Taipei calling on Beijing to release 12 Hong Kongers who were detained in August while allegedly attempting to flee to Taiwan, organizers said.

The participants, many dressed in black and wearing masks, held signs bearing statements such as “Free Hong Kong, revolution now,” “Save 12 Hong Kong youths,” and “Bring them back,” among other messages.

Black and yellow balloons were arranged to read: “Save 12.”

Tsang Cheung-kui, who moved from Hong Kong to Taiwan in February, said it was important to him to demonstrate as a Hong Konger.

“Those of us Hong Kongers in Taiwan want to come support them,” he said. “It’s very obvious, Hong Kong is no longer Hong Kong, but we haven’t given up on Hong Kong.”

Jeff Hou, a Taiwanese who brought his 13-year-old son to the rally, said it was important to march for democratic freedoms.

“As long as it has to do with democracy, we should come stand out here,” he said. “Democratic freedoms are very important to us Taiwanese.”

A 27-year-old protester, who wished to be identified only as Emma, said she was concerned about the fate of the 12 who were arrested.

“I’m doubtful of whether they were arrested legally, and whether [their] rights are being upheld,” she said. “I wanted to come to this march in support of them.”

The rally began at about 2pm outside the Zhongxiao Fuxing MRT station in Daan District （大安）.

The demonstrators began marching toward the Hong Kong Economic, Trade and Cultural Office in Taipei at about 3pm, chanting slogans such as “Release 12 Hong Kongers,” “Free Hong Kong, revolution now” and “Stand with Hong Kong.”

At about 4pm, organizers said that the number of participants had reached 3,000.

The demonstration was organized by several groups, including the Taiwan Association for Human Rights, the Hong Kong Outlanders and the Judicial Reform Foundation.

Many other groups, including the Presbyterian Church in Taiwan, the National Students’ Union of Taiwan and the Taiwan Tongzhi （LGBTQ+） Hotline Association, were also represented at the rally.

Lim is the chair of the Taiwan Parliament Group for Hong Kong, which was created in May, while Hung is the group’s deputy chairman.

“As Taiwan stands on the first line of defense against China’s authoritarian expansion, we are fighting the same war as Hong Kongers,” Lin said. “This is why we must stand with Hong Kongers.”

“We have the means, we have the ability and we should also explain to the world that Taiwan, as a democratic country, is capable of assisting friends in Hong Kong,” he said.

About 20 cities around the world were expected to hold events in solidarity with the 12 Hong Kongers, organizers in Taipei said.

Protesters at a rally in Taipei yesterday hold signs bearing the names of 12 Hong Kongers arrested by China as they call for their release. Photo: Liu Hsin-de, Taipei Times