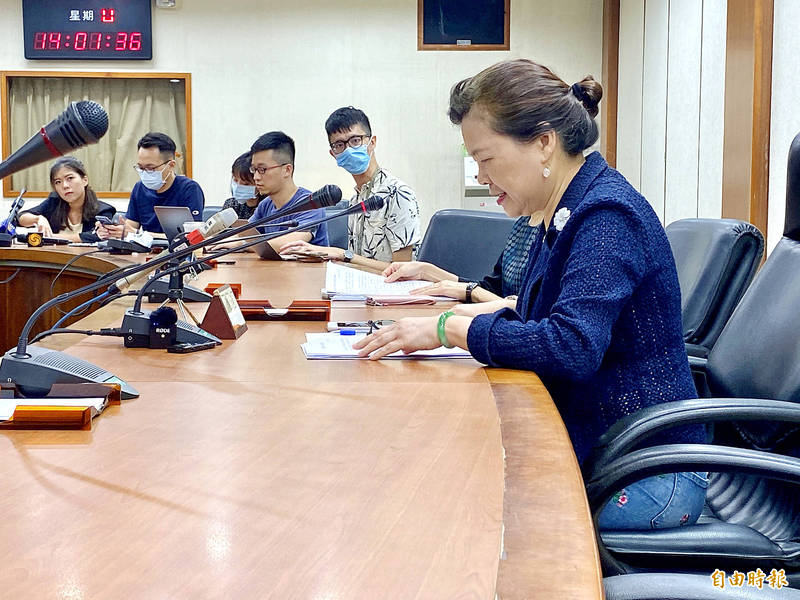 Minister of Economic Affairs Wang Mei-hua, right, speaks at a news conference in Taipei yesterday. Wang said that the atmosphere at a meeting on Friday with a US delegation led by US Undersecretary of State for Economic Growth, Energy and the Environment Keith Krach was good, and the visit was an important step forward for Taiwan-US relations. Photo: Huang Pei-chun, Taipei Times

MEETING OF MINDS: The informal exchanges touched on topics such as US initiatives to secure 5G networks and how Taiwan regulates investments from China

Taiwan and the US are to start a formal dialogue after the two sides on Friday exchanged opinions on an array of issues, Minister of Economic Affairs Wang Mei-hua （王美花） told a news conference yesterday in Taipei.

Although the delegation maintained a low profile and held meetings with government officials behind closed doors, their exchanges were to prepare for a formal dialogue and pave the way for more specific discussions before reaching any concrete results, she said.

The US delegation visited Taiwan between Thursday and Saturday to attend Saturday’s memorial service for former president Lee Teng-hui （李登輝）, and interact with high-ranking officials and members of different sectors over various issues, the Ministry of Foreign Affairs said.

Although Friday’s talks were informal, it was an important step for Taiwan and the US, Wang said, adding that the atmosphere in the meeting was good.

The US delegation discussed the US’ “Economic Prosperity Network” initiative would start from the perspective of economic security and aims to promote the values of economic freedom, openness, transparency and fairness, while the clean network policy seeks to maintain network information security and protect personal information, Wang said.

The Taiwanese officials informed their US counterparts that all five of the nation’s telecom service providers have been listed as “Clean 5G” networks by the US Department of State, and that Taiwan did not use Huawei Technologies Co’s （華為） core equipment in its 4G deployment and would continue this approach with its 5G development, she said.

Regarding industrial supply chain realignment, Wang said the US delegation was told that Taiwan early last year started a policy to encourage Taiwanese businesses to repatriate capital and return operations to Taiwan in response to the US-China trade dispute.

The program has since attracted more than 200 Taiwanese firms to invest in the domestic market, she said.

During the meeting, the US delegation expressed an interest in Taiwan’s semiconductor ecosystem, she said.

Taiwanese officials told them about the advantages of the nation’s semiconductor industry, including its complete ecosystem from wafer manufacturing to packaging and testing, which makes Taiwan a reliable business partner in the global supply chain and has attracted foreign investment in the nation, she said.

Regarding investment review, Taiwanese officials introduced the delegation to the nation’s foreign investment review regulations, especially a separate review of Chinese capital, which received special attention from the US, she said.

The topic would be included in formal dialogues, she added.

Wang said that the exchanges were part of economic cooperation at a strategic level and each issue was led by the US State Department.

The two sides did not discuss a possible Taiwan-US bilateral trade agreement, as that would be handled through the Office of the US Trade Representative, she said.