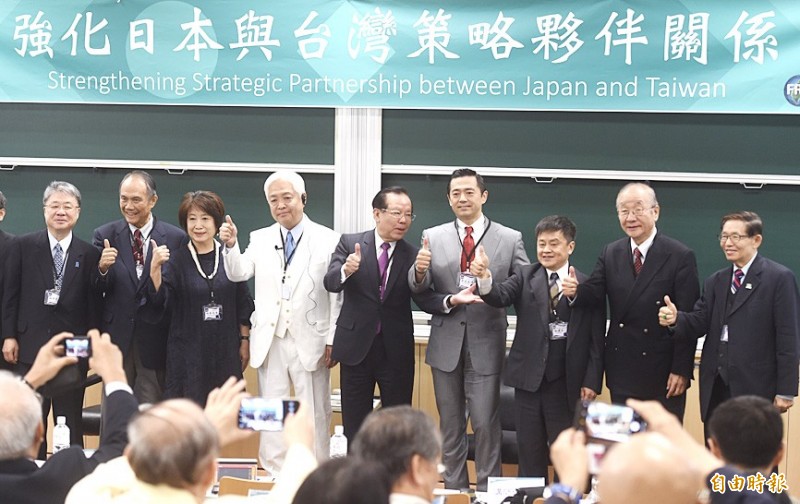 ‘STRENGTHENING PARTNERSHIP’: Japanese lawmaker Jikido Aeba said that Tokyo should commit to supporting Taiwan should the nation face a threat to its security

Japan should enforce a law parallel to the US’ Taiwan Relations Act （TRA） to consolidate its partnership with Taiwan, Jikido Aeba, a Japanese lawmaker and academic, told a seminar in Taipei yesterday.

He is also concerned about Taiwan’s security in the face of mounting Chinese pressure, Aeba told a seminar titled Strengthening Strategic Partnership between Japan and Taiwan, which was organized by the Formosa Republican Association and the Japanese Conservative Union （JCU） at National Taiwan University.

Taiwan’s future is at stake in its presidential and legislative elections on Jan. 11, while it is expected to face more pressure from China after the elections, said Aeba, who is chairman of the JCU.

While many Japanese hope support for Taiwan can be bolstered, the past 70 years has seen mostly economic collaboration, he said.

Democratic partners, such as Japan, the US, India, Australia and South Korea, should support Taiwan, while Tokyo should announce that it would guard Taiwan if it faces security threats, he said.

The Japanese government should establish a Taiwan-Japan relations bill, while amending its constitution to enable the Japan Self-Defense Forces to defend its Asian partners, he said.

It is important for Japan that Taiwan maintains its democracy and freedoms, said Genki Fujii, a Japanese academic of international affairs.

If Taiwan were annexed by China, Japan’s security, economy and social prosperity would be affected as well, Fujii said, adding that the destinies of Taiwan and Japan are closely tied.

Taiwan has followed Japan in its economic development and grown into a democracy, and its political and economic achievements are remarkable in Asia, he said.

By contrast, China falsely claims to have a capitalist system, but it steals ideas from other countries, he said.

He asked how China could lead a nation as advanced as Taiwan.

As an outsider, Taiwan is a great country, Fujii said, calling on Taiwanese to be more confident.

Taiwan-Japan ties should be consolidated through legislation, he said, adding that the Japanese government should enforce a parallel version of the TRA.

While the issue is not yet on the Japanese government’s agenda, some lawmakers have expressed an interest in it, he said, adding that the JCU would continue lobbying for the issue, even though it might take some time.

Steve Bannon, a former White House strategist for US President Donald Trump, gave a recorded speech at the seminar.

Taiwan’s elections next month are about defending independence and freedom, which is far more important for the region and the entire world, especially as the Chinese Communist Party continues to enslave its people and threaten regional order, Bannon said.