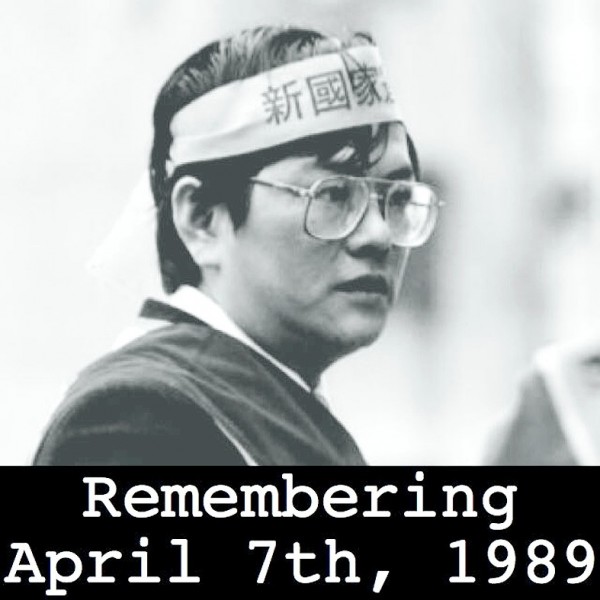 Free speech campaigner Deng Nan-jung is pictured in a screenshot taken yesterday of an image posted on Facebook to commemorate the 26th anniversary of his death. Photo: Facebook screen grab

OUTSPOKEN: On April 7, 1989, Deng Nan-jung set himself on fire rather than be arrested another time for antigovernment materials he published in his magazine

“Freedom of speech is a natural right and should be protected by the state. The First Amendment of the United States constitution prohibits the making of any law depriving people of freedom of speech; our Constitution also stipulates that people shall have freedom of speech, teaching, writing and publication,” said Yao, who proposed an extemporaneous motion in the legislature in Taipei, calling for a “Freedom of Speech Day” to be established on April 7.

On April 7, 1989, Deng, then editor-in-chief of Freedom Era Weekly （自由時代週刊）, set himself on fire as heavily armed police attempted to break into his office after he had been barricaded inside for 71 days to prevent his arrest following his being charged with sedition for the antigovernment views expressed in his magazine, which published a draft “Republic of Taiwan constitution” in 1988.

The office was later named Deng Nan-jung Memorial Hall in commemoration of his bravery in calling for “100 percent freedom of expression.”

“Tainan, Kaohsiung, Taichung, Yilan, Yunlin, Chiayi and Pingtung have all made April 7 [municipal] Freedom of Speech Day and on the legislative floor I have called on the Executive Yuan to establish the day as a national holiday many times, including a declaration during the Sunflower movement last year,” Yao said.

DPP Legislator Lee Ying-yuan （李應元） seconded Yao’s proposal, saying that Deng’s deed, “to sacrifice himself for 100 percent freedom of speech, a belief harmless to others, is sublime even when put in the context of the span of human history.”

“This is an issue that goes beyond party lines and I hope that the country and society can learn a lesson from it, so that our children understand that freedom did not come freely and that democracy is a result of relentless struggles,” Lee said, adding that he goes to a commemorative event at New Taipei City’s Chinpaoshan Cemetery （金寶山）, where Deng is buried, every April 7 to pay tribute to Deng, “just as I did today [yesterday].”

To mark the 26th anniversary of Deng’s death, a number of people, on their own initiative, visited the cemetery to pay tribute to Deng.

In the cities and counties that have designated April 7 as Freedom of Speech Day activities, such as film festivals, seminars and concerts, have also been held this week to heighten public awareness of democratic values.

A woman places a red rose on a plaque at Chinpaoshan Cemetery in New Taipei City yesterday to commemorate the 26th anniversary of the death of Taiwanese democracy pioneer Deng Nan-jung. Photo: Chen Chih-chu, Taipei Times