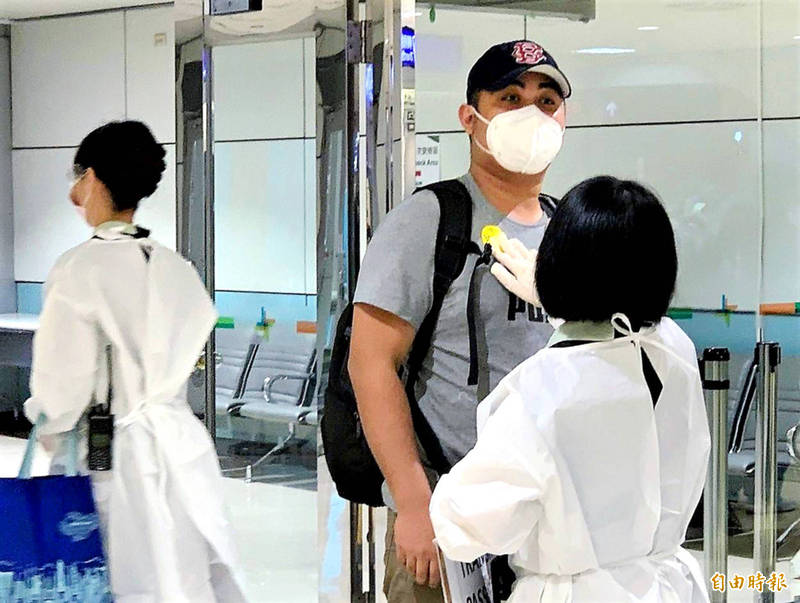 The Central Epidemic Command Center yesterday reported 26 new cases of the Omicron subvariants BA.4 and BA.5 of SARS-CoV-2 among international travelers arriving between May 30 and June 5, as well as the nation’s first case of multisystem inflammatory syndrome in children （MIS-C） in a teenager.

The nation’s first five cases of the two Omicron subvariants were reported on Monday, bringing the total number of cases to 31, said Centers for Disease Control （CDC） Deputy Director-General Philip Lo （羅一鈞）, who is the deputy head of the CECC’s medical response division.

Seven of the cases were infected with BA.4 and 24 had BA.5, the CECC’s acting spokesman said, adding that eight of the travelers arrived from the US, six came from Germany, four from Spain, three from Singapore, two each from Australia and Thailand, and one each from Chile, El Salvador, Poland, South Korea, Turkey and the UK.

The BA.5 subvariant has triggered a new surge of COVID-19 cases in Portugal, and the two new subvariants have been spreading beyond the US and European countries, Lo said.

Those arriving in Taiwan either had mild or no symptoms, he said.

Workers at the nation’s airports and harbors have been receiving regular COVID-19 tests, he said, adding that genome sequencing would be conducted for those who might have contracted the disease from inbound travelers.

The CECC would ask the Advisory Committee on Immunization Practices to assess if border control personnel and disease prevention staff members should be advised to get a second booster shot of a COVID-19 vaccine for better protection, he said.

Most of them received a first booster shot in December last year or January, so if the committee agrees, they would start getting a second booster shot this month, he said.

Domestic cases in northern Taiwan are gradually dropping, while new cases in central and southern Taiwan have plateaued, he said, adding that nationwide numbers are expected to continue falling this week.

Among the 227 new moderate cases and 165 severe cases reported yesterday, three had MIS-C, one infant had suspected encephalitis and another infant had bronchiolitis, he said.

One of the MIS-C cases was a 13-year-old boy who has no chronic diseases and had received two vaccine doses. He was diagnosed with COVID-19 on May 3 and recovered after having a fever for two days, Lo said.

However, on Monday last week, the boy’s temperature soared to 39.4oC, and on Friday last week, he developed rashes, a sore throat, red eyes, coughing, diarrhea, abdominal pain, chest tightness and shortness of breath, and was admitted to a hospital the following day, Lo said.

The other two cases of MIS-C are a five-year-old boy and a 10-year-old girl, and are being treated in general wards in hospitals, he said.

A two-year-old boy with no underlying health issues was found with suspected encephalitis, and he is being treated at an intensive care unit, while a one-year-old boy who had bronchiolitis and respiratory distress after infection has been discharged from hospital, Lo said.