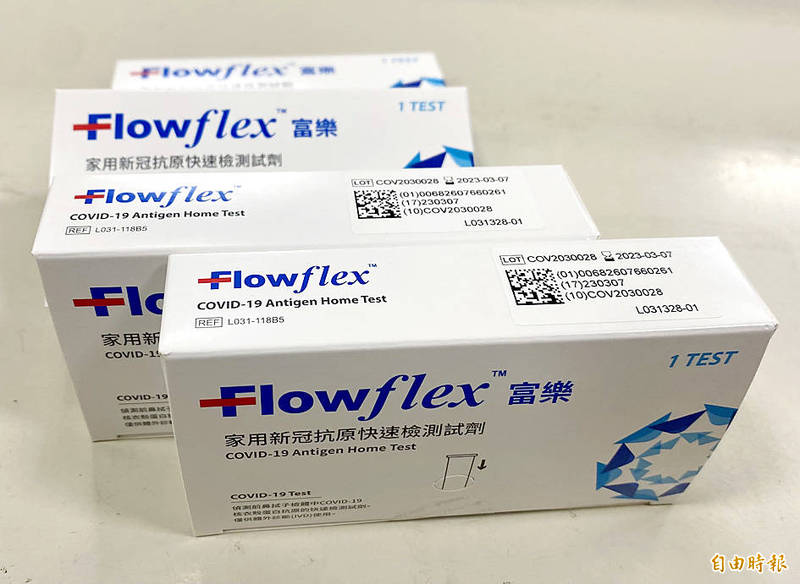 The Food and Drug Administration （FDA） yesterday banned the sale and importation of Flowflex COVID-19 rapid test kits, after 2.37 million flawed kits, allegedly made in China, entered the Taiwanese market and were sold to 13 government agencies.

According to regulations, the kits should be manufactured in factories in the US, but the importer allegedly imported poor-quality kits from China illegally and sold them as US-made products, FDA section chief Fu Ying-hsien （傅映先） said.

The FDA ordered that all Flowflex COVID-19 Antigen Home Tests that were imported by Safeway OA Supply Co Ltd （大鑫資訊） be recalled and warned customers against buying or using the product.

The products supplied by the company are suspected to have been manufactured and packaged by YiKang Biological Technology Co Ltd in Hangzhou, China, and shipped to Hong Kong before being sent to Taiwan by air, the Ministry of Justice’s Investigation Bureau said.

Customers reported that the kits failed to reveal lines in either the control line or test line region, it added.

Deputy Taipei Mayor Huang Shan-shan （黃珊珊） said the city’s fire department purchased 100,000 kits, none of which had been provided to the public, and it had already asked to return the goods and be refunded.

Taichung Health Bureau Director Tseng Tzu-chan （曾梓展） said the bureau would return the 330,000 kits it purchased and look for other sources to fill its needs.

Company official Chu Shou-hui （朱壽暉） and an assistant surnamed Lee （李） were released on bail of NT$1 million （US$33,661） and NT$100,000 respectively, while the other two were released, prosecutors said.

The FDA said that importers who procure medical products from abroad that do not comply with approved specifications without authorization face up to three years in prison and/or a fine of up to NT$10 million, under Article 62 of the Medical Devices Act （醫療器材管理法）.

If the importer uses the name, instructions or labels of another legal medical device, those responsible face up to five years in prison and/or a fine of up to NT$20 million according to Article 61 of the act, the FDA added.