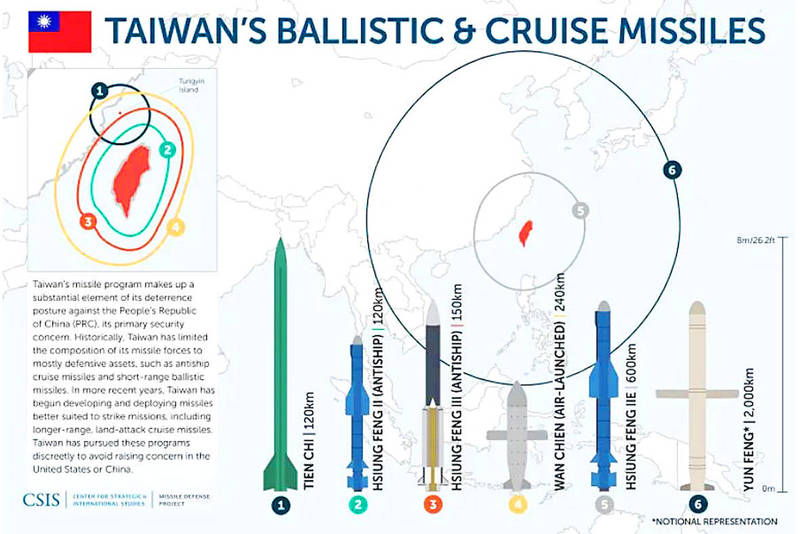 You was presenting an online keynote speech on the Web forum www.taiwanus.net.

He said that when he was the premier he already knew that the Cloud Peak, a medium-range supersonic land-attack cruise missile developed in Taiwan, could reach Beijing. At the time he could not talk publicly about it, but now he could, as the missile is in mass production.

Taiwan is not invading China, but China should take Taiwan’s ability to attack Beijing into consideration before launching an invasion, You said yesterday.

The Taiwan Strait is a natural barrier that provides a defensive advantage to Taiwan, so a Chinese invasion would be different from Russia’s invasion of Ukraine, he said.

Taiwan could use anti-ship missiles such as the Hsiung Feng III （雄風三型, Brave Wind III） against Chinese naval forces crossing the Taiwan Strait, he said, adding that if Chinese vessels managed to land, Taiwanese should have the determination to fight like the Ukrainians during Russia’s invasion of their country.

“God helps those who help themselves” is the most important lesson that Taiwan should learn from the Russia-Ukraine war, as good armaments and geographic location are useless without the will to defend, You said.

Separately, an expert said on Saturday that Taiwan should explore which weapons to use in asymmetric warfare during a potential cross-strait conflict.

Institute for National Defense and Security Research analyst Shu Hsiao-huang （舒孝煌） was responding to media queries about Taiwan’s military cooperation with the US.

US Secretary of Defense Lloyd Austin said on Saturday at the Shangri-La Dialogue in Singapore that the US has not changed its Taiwan policy and would continue helping Taiwan to bolster its self-defense capabilities.

However, critics in Taiwan have said that some arms purchases from the US have been canceled, including M109A6 Paladin self-propelled howitzers, MH-60R anti-submarine helicopters and Black Hawk search-and-rescue helicopters.

The Ministry of National Defense has said that the M109A6 order was canceled due to a “crowded” production line and the other two were called off due to their high costs.

The US Congress passed the US National Defense Authorization Act last year, recommending that the US Department of Defense invite Taiwan to this year’s Rim of the Pacific （RIMPAC） military exercise, but Taiwan was not invited, according to the invitation list of 26 countries released last month.

Some analysts said the changes in arms sales and lack of a RIMPAC invitation indicated that the US hopes Taiwan will stick to asymmetric warfare tactics, while some suspected that military cooperation between the two sides had experienced setbacks.

The asymmetric warfare strategy is based on a consensus between Taiwan and the US, National Taiwan University associate professor of political science Chen Shih-min （陳世民） said on Saturday, adding that the US basically hopes to maintain cross-strait peace and stabilize the relationships between the US, China and Taiwan.

The participants in RIMPAC are all sovereign nations, so the US did not invite Taiwan so as not to infuriate China, he added.

He said that Taiwan should thoroughly re-examine its defense plans for a potential cross-strait war, make its own asymmetric warfare plans and communicate its needs to the US.

China boasts some of the best UAV technology in the world, which is far more advanced than the drones used by the two sides in the Russia-Ukraine war, but the strategies Taiwan and the US have been discussing have failed to include plans to counter UAVs, he said.