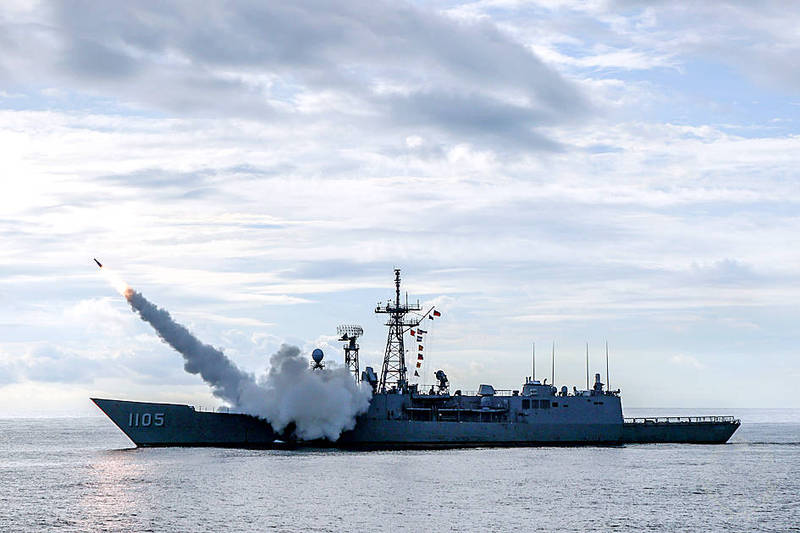 A RIM-66 missile is launched from a navy ship during a drill on May 17. Photo courtesy of the Ministry of National Defense

‘SERIOUS’ ABOUT DEFENSE: While the Ministry of Foreign Affairs welcomed the deal, a researcher said that such sales lack substance and provide limited military support

By Lo Tien-pin and Jake Chung / Staff reporter, with staff writer and CNA

Washington has approved a proposed sale of US$120 million in spare parts for ships and systems, and related equipment to Taiwan, the fourth Taipei-bound defense package approved by the administration of US President Joe Biden.

The US Defense Security Cooperation Agency said in a statement on Wednesday that the sale would include unclassified spare and repair parts for ships and ship systems, logistical technical assistance, US government and contractor representative technical and logistical support, and other related elements of logistical and program support requested by Taiwan.

“The proposed sale will contribute to the sustainment of the recipient’s surface-vessel fleet, enhancing its ability to meet current and future threats,” the statement said.

The Ministry of National Defense expressed “sincere gratitude” for the deal, saying it would help the navy maintain its equipment and replenish supplies to remain combat ready in the face of an increasingly assertive Chinese military.

The sale is expected to be finalized within one month, it added.

The Ministry of Foreign Affairs said that the latest deal was the third defense package offered to Taiwan this year and the fourth since Biden took office in January last year.

The first one, in August last year, was a US$750 million deal to purchase 40 Paladin M109A6 self-propelled howitzers.

It was followed by a US$100 million package in February that included equipment and services to support participation in the Patriot International Engineering Services Program and Field Surveillance Program for five years.

The third, in April, was a US$95 million sale of equipment and services aimed at maintaining Taiwan’s US-made Patriot missile air defense system.

It also reflects the US’ continued policy of normalizing defense-related sales to Taiwan, it added.

However, Chieh Chung （揭仲）, a researcher with the Association of Strategic Foresight, disagreed that the package shows the US “is serious about Taiwan’s national defense needs.”

The sales are only continuing the standardization of military sales to Taiwan adopted under former US president Donald Trump, as most of the defense packages offered by the Biden administration are spare parts and lack substance, Chieh said yesterday.

The most recent sale provides limited help in increasing Taiwan’s military capability, he said, adding that it fails to resolve doubts about US weapons sales after changes made to orders for the Paladin howitzers.

Whether the US makes any other changes to agreed-upon sales, agrees to sell Taiwan AGM-158 Joint Air-to-Surface Standoff Missiles and when the US will agree to sell Taiwan smart naval mines are the three things to watch to determine whether the US is “serious” about Taiwan’s defense needs, Chieh said.

The AGM-158, which could be equipped on upgraded F-16A/Bs, would provide the jets with cross-strait strike capabilities, as the missiles have a target range of 370km, but the US has not agreed to the sale, despite repeated requests for the missiles by the defense ministry since 2014, Chieh said.

The US’ refusal to sell Taiwan smart naval mines — first requested by Taiwan in 2018 and again in August 2020 — is strange because they are the kind of equipment that many in the Biden administration say should be a high-priority purchase to increase Taiwan’s asymmetric warfare capabilities, Chieh said.