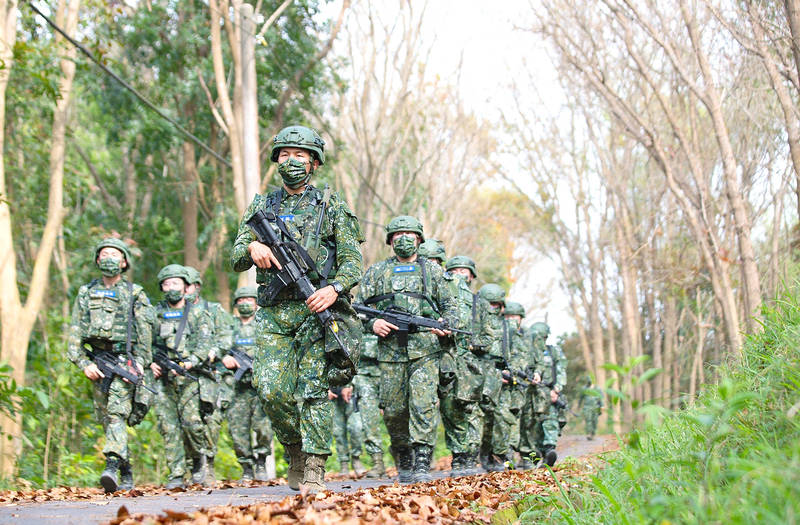 Reservists train in Tainan on March 22. Photo courtesy of the Eighth Field Army

BACKUP: The aim is to recruit about 100 reservists next year, who are trained on weekends and holidays to become familiar with regular troops’ operations

Starting next year, the military is to double the number of special reservists it recruits annually as part of a reform project to create a more reliable backup force for regular troops, amid a growing military threat from China.

The Ministry of National Defense in a report to lawmakers last week said that it would recruit about 100 “weekend warriors” next year, compared with 49 expected to be trained this year.

The term “weekend warriors” refers to reservists who participate in the ministry’s short-term voluntary service program, under which they undergo training at military bases over weekends and on holidays.

The military is expected to set up new boot camps, reserve brigades and training centers in the coming years to beef up its reservist training capacity, as the military threat from China continues to escalate, the report said.

The project would include a larger contingent of “weekend warriors” who are familiar with regular troops’ operations and training, it said.

Previously, the ministry had said that Taiwan’s military could train only up to 120,000 reservists per year, although the number of eligible reservists in the nation was about 320,000.

However, the ministry in a report in 2020 said the military was working to establish five new boot camps and three reservist training centers in the coming years, which would increase its annual training capacity to 268,000 reservists.

The “weekend warrior” project was initiated in 2017 to recruit military retirees who still have good combat skills and expertise, the ministry said.