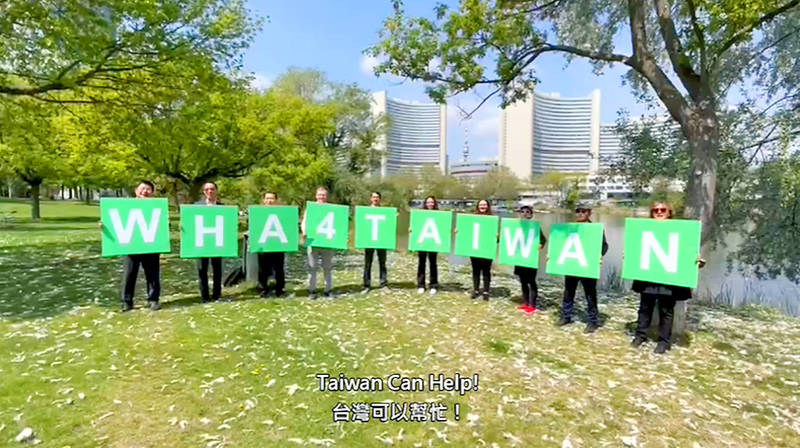 Taiwan’s representative offices in Austria, the Czech Republic, Slovakia, Hungary and Poland have jointly produced a video calling for Taiwan’s participation in the annual World Health Assembly （WHA）, which is to begin on Sunday.

In the video, members of the five representative offices can be seen holding banners reading “Taiwan can help” and “Taiwan is helping.”

International Ombudsman Institute secretary-general Werner Amon and Czech Senator Marek Hilser also appear in the video, saying that democracies should work together in the face of the war in Ukraine, the COVID-19 pandemic and global economic crises.

Droba said that Taiwan’s voice should not be ignored in the field of medicine.

“The world should hear Taiwan’s voice. Please give Taiwan a seat at the World Health Assembly,” he said.

Lee said that Taiwan is an important member of the international community, not only through its contributions to world health, but through its involvement in humanitarian missions, including US$33 million in donations, plus and 650 tonnes of materials toward efforts to assist Ukraine.

“Taiwan has the determination and ability to help, and will continue to make important contributions to the international community,” she wrote.

Representative to Ireland Yang Tzu-pao, front row in green jacket, and Taiwanese living in Ireland hold a banner and the national flags of both nations in Dublin on Sunday to urge the WHO to grant Taiwan a seat at this month’s World Health Assembly. Photo courtesy of the Taipei Representative Office in Ireland via CNA