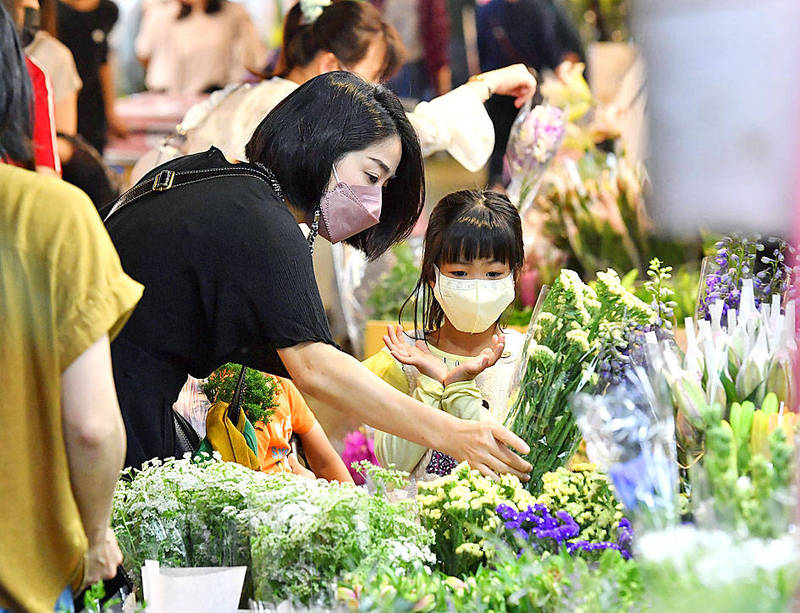 SICK PAY: Amid record daily cases, the Bureau of Labor Insurance said that people who test positive for COVID-19 and are unable to work can claim injury or sickness benefits

The center added the clinics to its list of designated community testing sites to provide government-funded PCR tests for people who tested positive in a rapid test or are referred for testing by a doctor, the CECC said.

People should make an appointment before going to a clinic for a test, the CECC said.

Minister of Health and Welfare Chen Shih-chung （陳時中）, who heads the center, said that people who feel they are at risk and have a fever, respiratory symptoms, abnormal taste and smell, or unexplained diarrhea should be tested at a clinic.

People with more serious symptoms — such as difficulty breathing, persistent chest pain, or bluish skin, lips or nails — should go to a hospital, he added.

Other serious symptoms include having a heartbeat of more than 100 beats per minute without a fever; being unable to eat, drink or take medicine; or showing a significant decrease in urine output over a 24-hour period, he said.

The Bureau of Labor Insurance on Thursday said that people covered by the Labor Insurance Program who are unable to work after testing positive for COVID-19 can claim injury or sickness benefits after four days of absence from their job.

For example, someone with the maximum insured monthly salary of NT$45,800 who applied for the benefit from the fourth through the 10th day of their quarantine would receive a one-time payment of about NT$5,340 for the seven-day period, Department of Labor Insurance Director Chen Mei-nu （陳美女） said.

Other workers might receive less than this amount, depending on their insured monthly salary, she added.

Under the program, sickness benefits are calculated at half of a worker’s insured monthly wages.

The Ministry of Labor also adjusted how it calculates sick leave for workers who contract COVID-19, but do not need to be hospitalized.

In a revised interpretation of Regulations of Leave-Taking of Workers （勞工請假規則）, workers with COVID-19 who quarantine at home or in designated facilities would be considered as being on “hospitalized” sick leave, meaning they are allowed a maximum of one year of leave within a two-year period, as a 30-day cap for “non-hospitalized” leave was considered insufficient, it said.

The interpretation, which applies retroactively from April 8, also stipulates that sick leave taken by workers with COVID-19 should not be deducted from employers’ calculations for perfect attendance bonuses.

The changes came as the CECC reported another record number of COVID-19 cases at 36,213.

The cases, which were 20 percent higher than a day earlier, consisted of 36,168 domestic cases and 45 from abroad, it said.

The 10 deaths involved four men and six women in their 30s to 90s, who tested positive between April 21 and Tuesday, and passed away between April 29 and Monday, CECC data showed.

The youngest was a man in his 30s who was unvaccinated and had a history of urinary tract stones, while the other nine were all older than 60 and had underlying medical conditions, the data showed.

《TAIPEI TIMES》 Cambodia naval base to be us…