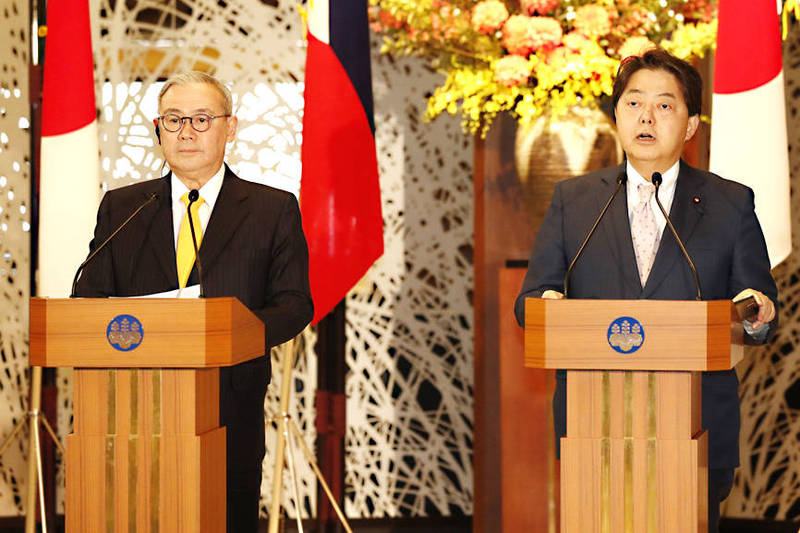 Japan and the Philippines yesterday agreed to start talks toward a possible defense agreement that would allow closer cooperation between their militaries amid regional tensions with China and Russia’s invasion of Ukraine.

Japanese Minister of Foreign Affairs Yoshimasa Hayashi and Japanese Minister of Defense Nobuo Kishi, along with Philippine Secretary of Foreign Affairs Teodoro Locsin Jr and Philippine Secretary of Defense Delfin Lorenzana, in their first so-called “2+2” security meeting agreed to begin formal discussions about a possible reciprocal access agreement — a pact that would allow their troops to visit each other’s countries for training, and to exchange defense equipment to increase interoperability and cooperation.

Japan and the Philippines, both US allies, have in the past few years stepped up joint exercises and defense cooperation. In 2020, Tokyo and Manila agreed on the export of Japanese air radar systems to the Philippine military.

The four ministers strongly opposed “actions that may increase tensions” in the East and South China seas, and affirmed their commitment to a rules-based approach to resolving competing claims under international law.

They also said that Russia’s aggression in Ukraine affects Europe and Asia under an international order that does not accept any unilateral change to internationally recognized borders by force.

Although it was implied that China was their main concern, they carefully avoided identifying it by name.

“We agreed that it’s timely to look into the possibility of further expanding our defense cooperation and activities” and to explore ways to conduct capacity and capability building activity “to address issues of mutual concern,” Lorenzana told a joint news conference after the talks.

Kishi said the first “2+2” meeting marks “the beginning of the two countries’ efforts toward further deepening their security ties.”

Japan in January signed a defense cooperation pact with Australia, the first such agreement for Canberra other than with the US.

Japan in the past few years has significantly expanded security talks and joint drills with the US and other partners that share its concerns about China’s assertion of its territorial claims in the region, which is home some of the world’s busiest sea lanes.

Japan is especially concerned about Chinese military and coast guard activity in the East China Sea near the Japanese-controlled Diaoyutai Islands （釣魚台）, known as the Senkaku Islands in Japan.

Taiwan, China, the Philippines, Vietnam, Malaysia and Brunei have been locked in an increasingly tense territorial standoff in the busy South China Sea waterway for decades.