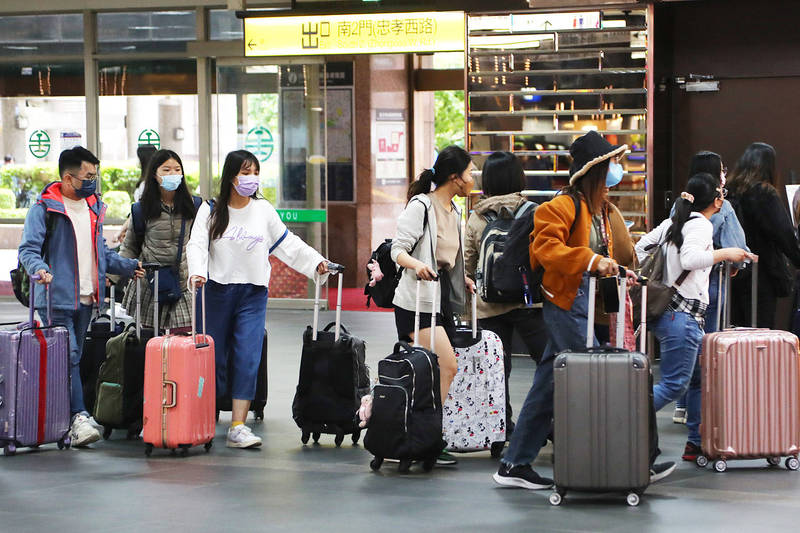 Passengers line up with their luggage at Taipei Railway Station yesterday. Photo: CNA

The nation could face a new wave of COVID-19 as people travel during the Tomb Sweeping Day four-day holiday that starts tomorrow, Minister of Health and Welfare Chen Shih-chung （陳時中） said yesterday.

Chen, who heads the Central Epidemic Command Center （CECC）, made the remarks as the center reported 87 new local COVID-19 infections and 152 imported cases — record highs for the year.

Twenty-two of the domestic cases were reported in Keelung, and were linked to a cluster of infections that has grown to 91 cases, Chen said.

The cluster, first reported last week, has spread rapidly, to include police officers and schoolteachers, he said.

In New Taipei City, 13 cases were added to a cluster linked to a TBI Motion Technology （全球傳動） factory in Shulin District （樹林）, bringing the total to 42.

Ten cases were company employees who tested positive during quarantine, one was an employee who caught the disease during self-health management, and two were nonemployee contacts of earlier cases, he said.

The situation at the company appears to be under control, he added.

Seven cases were linked to an apartment building cluster in New Taipei City’s Jhonghe District （中和）, with five people testing positive at COVID-19 testing stations, Chen said, adding that genome sequencing indicates that the cluster is connected to one in Taitung County.

A cluster connected to Datan Power Plant （大潭電廠） in Taoyuan expanded by 10 cases to 88, he said.

In Taichung, nine new cases were added to a cluster linked to a wedding banquet on Saturday last week, bringing the total to 12, he said, adding that some of them live in Taipei, Kaohsiung and Kinmen County.

Contact tracing has been challenging because not all the attendees live in Taichung, he said.

Some attendees started showing symptoms between Monday and Wednesday, said Centers for Disease Control Deputy Director-General Philip Lo （羅一鈞）, who is the deputy head of the CECC’s medical response division.

Sources of infection for 12 of yesterday’s cases have not yet been identified, including one linked to a female nurse in Hualien County, the center said.

She tested positive for COVID-19 while traveling in the south, Lo said, adding that she had a cycle threshold value of 13, which indicates a high viral load.

Lo did not identify the city or county she visited, but said that an investigation is ongoing.