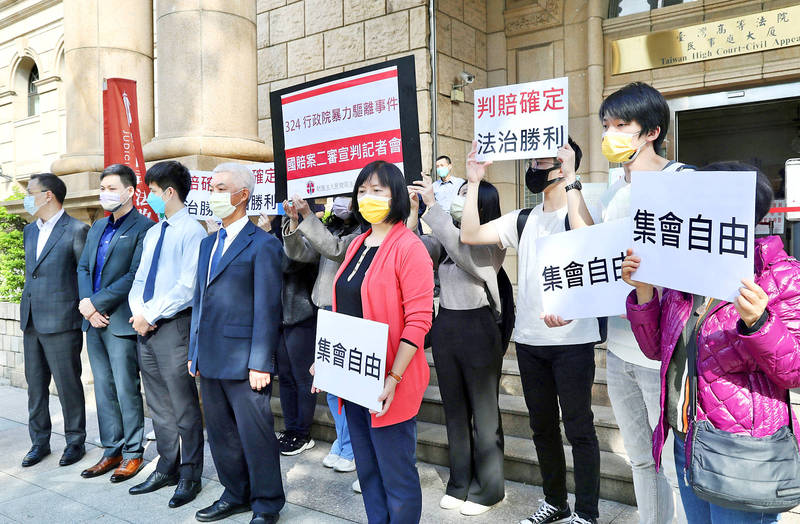 The High Court yesterday ordered the Taipei City Police Department to pay NT$1.41 million （US$50,708） in total compensation to 15 protesters injured during an occupation of the Executive Yuan complex in 2014.

Department officials said they respect the court’s decision, but expressed regret over the financial burden, saying the police officers were only doing their duty when they removed the Sunflower movement protesters from “illegally” occupying government premises.

The compensation was an increase from the first ruling by the Taipei District Court in 2019, when the department was ordered to pay NT$1.11 million to 10 protesters in a lawsuit filed by 29 people who said they suffered varying degrees of injuries due to the use of excessive force by police.

The 29 protesters, the police department and the Taipei City Government appealed the decision.

Among them was then-Taiwan Solidarity Union legislator Chou Ni-an （周倪安）, who told reporters after the High Court’s verdict that she had gone to the Executive Yuan, in her capacity as a lawmaker, to protect the protesters.

The ruling cited testimony and evidence that police had used excessive force to evict the demonstrators, with 15 of the protesters presenting medical records showing bone fractures, bruises to the head and body, and other injuries.

Lawyers for the protesters presented video footage showing several police officers using shields and batons to beat them, as opposed to statements by top police officials that the officers had been “gentle” in removing the arm-locked sit-in protesters.

Chou said she had been awarded NT$200,000 in compensation in both rulings, while other protesters received between NT$60,000 and NT$120,000, but they are little compared with the mental anguish, physical pain and financial burden that they went through.

“It is not a satisfactory result, for our litigation to end in state compensation. The top officials who instructed police officers to beat us were not held liable and did not receive any punishment,” Chou said. “Some were even promoted.”

Lauding the ruling, the Judicial Reform Foundation said in a statement: “This ruling rejected the appeal by the police and the Taipei City Government, and upheld the main decisions of the district court... It represents victory, as justice has prevailed.”

“However, we regret to say that after nearly eight years, the judicial investigation failed to identify any of the police officers who had used excessive force to assault the protesters, and none of them received any punishment or were prosecuted,” it said.

“We believe this case can show that citizens have the right to gather to protest, in a collective will against government policies, which helps to safeguard Taiwan’s freedom and democracy... We hope that the result of the litigation serves as a warning to state authorities against abusing the public,” it said.

The police or city government cannot appeal the ruling, but the protesters can still launch an appeal for higher compensation.