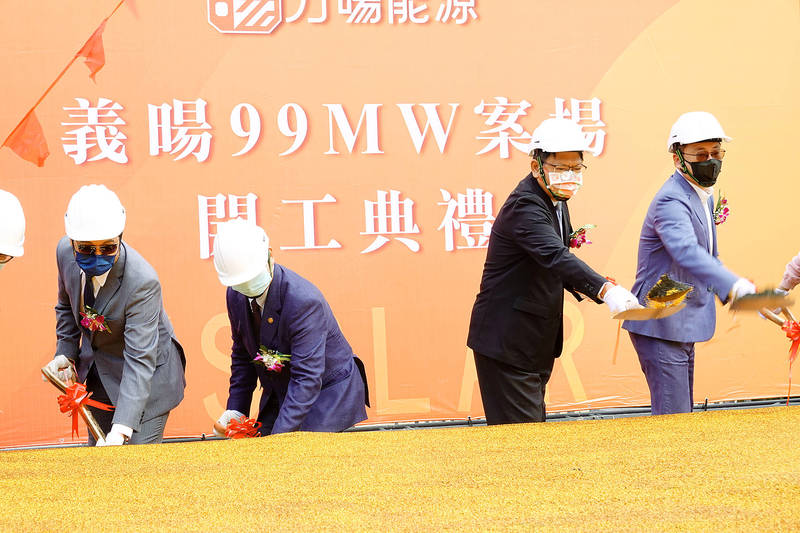 Electricity for households in Taiwan’s southernmost county could be generated using only renewable energy sources before the end of this year, Pingtung County Commissioner Pan Men-an （潘孟安） said yesterday.

Pan was speaking at a ceremony to mark the start of electricity generation at a solar farm in Pingtung.

The county launched a program in 2019 to help farmers establish solar facilities on farmland affected by land subsidence, Pan said.

In Pingtung, renewable energy sources, such as solar panels, currently generate 1.4 billion kilowatt-hours of electricity a year and can support the needs of 75 percent of the county’s households, Pan said.

If everything goes well, household electricity in Pingtung would be fully supported by renewable energy sources before the end of this year, he said.

The county government said it has since 2019 selected a number of plots of land for the project in Donggang （東港）, Linbian （林邊）, Jiadong （佳冬） and Fangliao （枋寮） townships that are seriously affected by land subsidence or are unsuitable for agriculture.

“In so doing, [the county government] can help make better use of idle land, while boosting the income of farmers who can receive rent from the land they rented to solar energy companies,” Pan said.

A 73-year-old fruit farmer surnamed Lin （林） said he rented a piece of his land to Ysolar Co for a solar farm.

He said he agreed to do so because the land is prone to flooding during harvest season, so he thought he might as well rent it out.

《TAIPEI TIMES》 No travel hitches, despite 1…

《TAIPEI TIMES》 Czech FM thanks Taiwan for U…