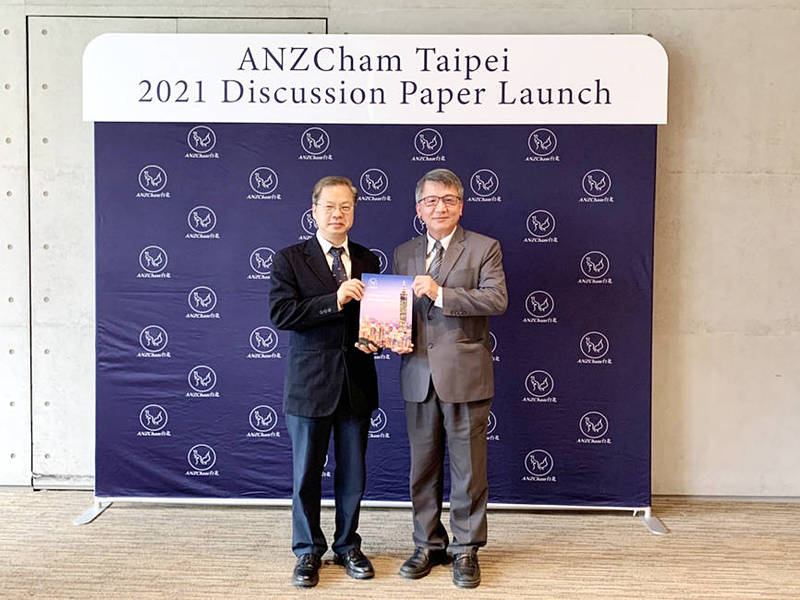 ROOM FOR IMPROVEMENT: Information in English is not sufficient and existing systems are not adequately digitized, the trade group’s annual discussion paper said

Most Australian and New Zealand companies find it difficult to do business in Taiwan given a lack of English proficiency and inadequate digitization, the Australia New Zealand Chamber of Commerce （ANZCham） in Taipei said in its annual discussion paper.

Only 38 percent of respondents said it is easy for a foreign company to enter the local market and do business, compared with more than 50 percent who said they disagreed.

The survey is part of the discussion paper ANZCham released on Tuesday to call for deregulation and strengthening of trade ties between Australia, New Zealand and Taiwan.

The chamber welcomed the Taiwanese government’s promotion of a bilingual policy, with respondents saying that information in English is not sufficient and existing systems are not adequately digitized, especially with regard to the banking system.

More than 50 percent of respondents said that laws and regulations are lacking in flexibility and information is not sufficient or clear enough, the survey said.

In particular, 44 percent said there is not enough information on free-trade zones, it showed.

Despite the challenges, 44 percent said the Taiwanese government was receptive and supportive in listening to their operational difficulties.

A large majority, 69 percent, said that foreigners working and living in Taiwan do not have difficulty integrating into the local society, despite the language divide.

Twenty-five percent said it is not easy for expat children to join international schools in Taiwan.

Trade between Taiwan and Australia saw a significant retreat last year due to the COVID-19 pandemic, as evidenced by a 20 percent drop in imports from Australia and flat exports, the paper said.

Things improved a lot in the first half of this year, with imports and exports from Taiwan spiking 48 percent and 30 percent after Australia gradually emerged from the negative impact of the COVID-19 outbreak and lockdowns, it said.

Taiwan’s top exports to Australia include machinery and electrical equipment, base metals and minerals, and gas products, it said.

The paper in particular pushed for favorable terms for imports of health support products from Australia, which are currently subject to a 30 percent tariff, putting Australian importers at a disadvantage.

The 30 percent tariff runs counter to global tariffs imposed on health support goods, which are typically lower than 10 percent, it said.

As the free-trade agreement between Taiwan and New Zealand signed in 2013 “continues to pay dividends,” ANZCham called on Taiwan and Australia to pursue a broad-based economic cooperation agreement.

At the paper’s launch event on Tuesday, National Development Council Minister Kung Ming-hsin （龔明鑫） said the government has worked hard over the past few years to relax regulations.

There is still a long way to go in terms of regulatory reform and deregulation, Kung said, adding that the government welcomes relevant advice from the business sector.

As for calls from ANZCham for Taiwan to ease its border control measures, Kung did not directly address the issue, but said that all parties have the same goal.