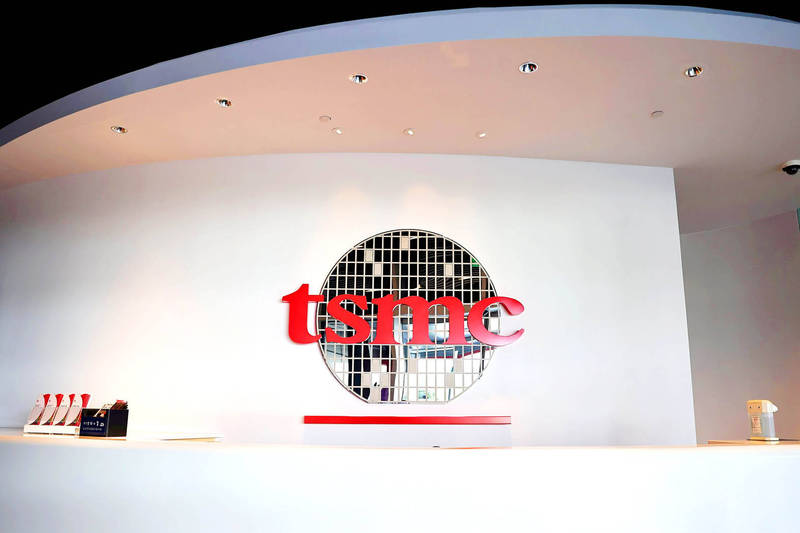 The Taiwan Semiconductor Manufacturing Co logo is pictured at its headquarters in Hsinchu on Jan. 19. Photo: Ann Wang, Reuters

/ Staff writer, with CNA and Bloomberg

Taiwan Semiconductor Manufacturing Co （TSMC, 台積電） yesterday said that it had responded to a request for chip supply chain information from the US Department of Commerce.

TSMC said in a statement that it had submitted answers to a questionnaire issued by the department, which asked that it be completed and returned by yesterday to address a global chip supply shortage.

The chipmaker said that it did not disclose any confidential information about its customers.

On Sept. 23, the US government held a meeting with TSMC, Samsung Electronics Co, Intel Corp and other companies on progress made by the industry to address issues in the semiconductor supply chain, and issued a request for information （RFI） on the subject on the same day.

The RFI asks companies in the semiconductor supply chain to “voluntarily share information about inventories, demand and delivery dynamics.”

Its aim is to “understand and quantify where bottlenecks may exist,” a statement on the department’s Web site reads.

Local media yesterday reported that TSMC was among 23 semiconductor companies worldwide that had submitted their answers to the questionnaire, and that the data provided by the Taiwanese chipmaker included a forecast indicating that the company’s sales for this year are expected to reach US$56.6 billion, up 24.4 percent from a year earlier.

Minister of Economic Affairs Wang Mei-hua （王美花） said that her ministry would not intervene in how Taiwanese semiconductor firms submit their questionnaires to the US government, adding that it was not appropriate for the ministry to know what information firms had submitted.

However, Wang said she had faith that Taiwanese semiconductor suppliers would protect sensitive customer data.

Tech companies in South Korea — home to Samsung and SK Hynix Inc — are preparing for a “voluntary submission” of relevant information, the South Korean Ministry of Economy and Finance said in a statement on Sunday, adding that the firms have been negotiating with the US on the extent of data to be submitted.

South Korean media reports have said the companies would only “partially comply” with the information request.

While the department’s request is voluntary, US Secretary of Commerce Gina Raimondo told industry representatives that the White House might invoke the Defense Production Act or other tools to force their hands if they do not respond.

Washington’s request sparked controversy in Taiwan and South Korea, with some fearing that the US is demanding that companies hand over trade secrets.

There have also been concerns in China that the US could use materials provided by TSMC and others to sanction Chinese firms.