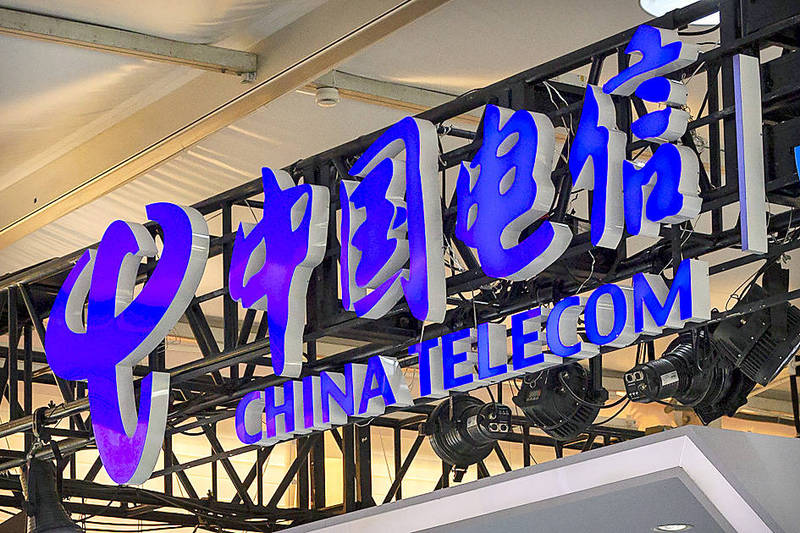 A China Telecom logo is pictured on a booth at the China International Fair for Trade in Services in Beijing on Sept. 5. last year. Photo: AP

MORE SCRUTINY? The US move ‘seems to dampen previous hopes that the US-China relations may be turning for the better,’ IG Asia’s Yeap Jun Rong said

The US on Tuesday banned China Telecom Corp （中國電信） from operating in the country, citing “significant” national security concerns.

The US Federal Communications Commission （FCC） ordered China Telecom Americas Corp to discontinue its services within 60 days, ending nearly 20 years of operations in the US.

The firm’s “ownership and control by the Chinese government raise significant national security and law enforcement risks,” the FCC said in a statement.

It gives opportunities for Beijing “to access, store, disrupt, and/or misroute US communications, which in turn allow them to engage in espionage and other harmful activities against the United States,” it said.

“The FCC’s decision is disappointing,” China Telecom spokesman Ge Yu （葛宇） said in an e-mail, Bloomberg News reported. “We plan to pursue all available options while continuing to serve our customers.”

There was no response to an e-mail sent to the press contact at the Chinese embassy in Washington.

The announcement on Tuesday ramped up concerns about further measures against Chinese tech firms and battered shares in such firms listed in New York.

The move “seems to dampen previous hopes that the US-China relations may be turning for the better,” IG Asia Pte market strategist Yeap Jun Rong said.

It “has raised some doubts as to whether further escalation may bring back more US scrutiny on Chinese technology players,” he said.

That followed an executive order by then-US president Donald Trump banning investments by Americans in a range of companies deemed to be supplying or supporting China’s military and security apparatus.

The US Department of Justice in April last year threatened to terminate China Telecom’s US dealings, saying that US government agencies “identified substantial and unacceptable national security and law enforcement risks associated with China Telecom’s operations.”

The move “sends a broader message to Beijing, that regardless of who’s president, the US continues to be concerned about the risks posed by Chinese tech firms operating in the US,” the Washinton-based Center for a New American Security’s director of the technology and national security program, Martijn Rasser, told Bloomberg.