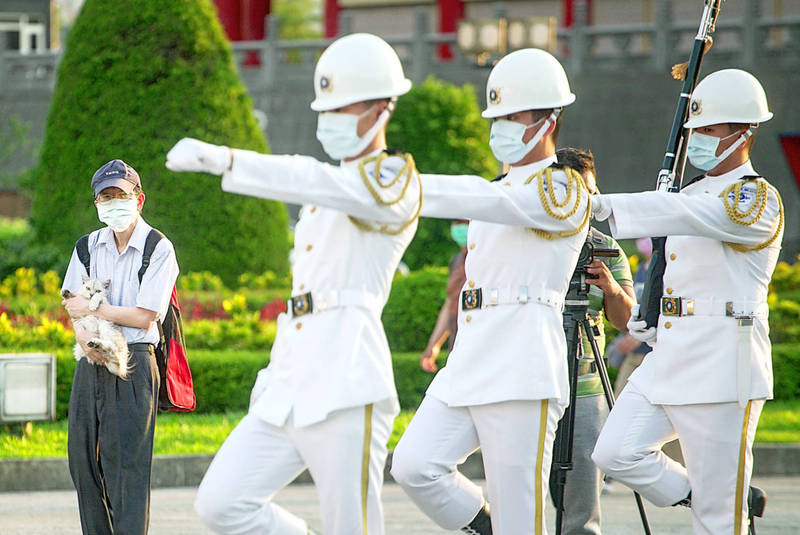 A man holds a cat as ceremonial guards march past during the changing of the guard at the Chiang Kai-shek Memorial Hall in Taipei yesterday. Photo: CNA

‘GOOD SIGN’: Thanks to public efforts, the number of COVID-19 cases is on a downward trend, the minister of health said, but told people not to let their guard down

The COVID-19 situation appears to be relatively stable and on a downward trend, Minister of Health and Welfare Chen Shih-chung （陳時中） said yesterday, as he reported 185 domestic COVID-19 cases and 15 deaths.

“This seems to be a relatively good sign,” Chen, who heads the Central Epidemic Command Center （CECC）, told a daily news briefing.

In Taipei and New Taipei City, the overall situation seems to be heading in a good direction, he added.

He attributed it to public efforts to control the spread of the virus, but warned people against letting their guard down.

Of the new local cases, 83 are males and 102 are females, from younger than five to older than 90, the center said.

The onset of their symptoms was between May 28 and Sunday, it said.

New Taipei City had the most local infections, with 98 cases, followed by 42 in Taipei, it said.

Keelung had 14 cases, Taoyuan had 10, Miaoli County had seven, Hualien County had four, Changhua and Hsinchu counties reported three cases each, Yilan County recorded two cases, and Taichung and Yunlin County each had one case, it said.

Of the 45 domestic cases reported outside Taipei and New Taipei City, 37 had known sources of infection, five had unclear connections with other cases and three were under investigation, it said.

The 15 deaths were nine men and six women in their 50s to 90s, the center said, adding that only one of them did not have a chronic health condition.

They experienced an onset of symptoms between May 10 and Tuesday last week. They were confirmed to have COVID-19 between May 18 and Sunday, and died between June 5 and Sunday, the center said.

The number of people hospitalized with COVID-19 has been on a downward trend since that peak, he added.

As of yesterday morning, the number of people being treated in dedicated COVID-19 rooms across the nation had fallen 14 percent from the peak to 2,198, Lo said.

The number of COVID-19 patients in intensive care peaked at 435 on June 7, he said.

That figure has also continued to decline over the past week, he said.

As of yesterday, 389 COVID-19 patients nationwide were in intensive care, he said.

People lining up for COVID-19 vaccinations should maintain social distancing and wear a mask, he said.