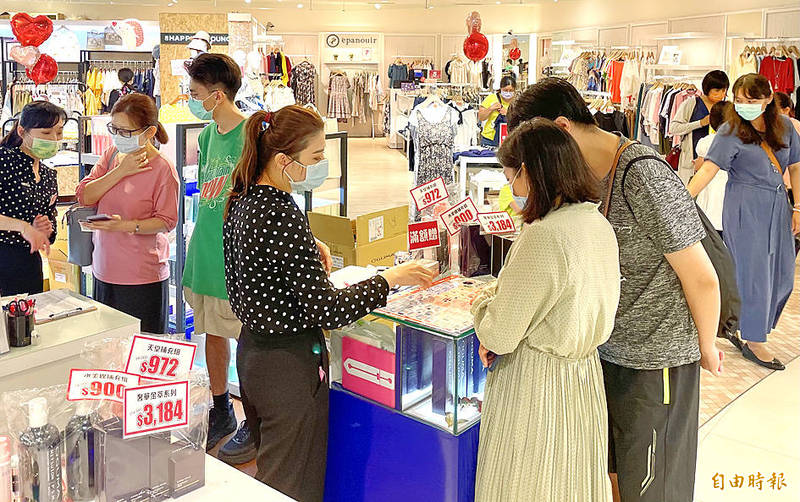 RECOVERING: While some companies have bounced back from the pandemic, others continue to struggle, and many are still affected by travel restrictions, the DGBAS said

Average monthly take-home pay in March rose 2.51 percent from a year earlier to NT$43,259, while total wages, including overtime and performance-based compensation, grew 2.49 percent to NT$48,897, the Directorate-General of Budget, Accounting and Statistics （DGBAS） said yesterday.

The pay increase came after some sectors recovered from the effects of the COVID-19 pandemic, while others remain affected, the agency said.

“While economic activity is largely unaffected by the pandemic, some sectors have not recovered due to lingering travel restrictions,” Chen said.

Tech firms have benefited from a boom in demand for devices used in remote working and schooling, while metal product makers have benefitted from a surge in raw material prices.

For the first quarter, regular wages gained 2 percent to NT$43,065 per month from the same period last year, while total monthly compensation increased 2.29 percent to NT$66,822, the report showed.

Consequently, electronics firms added 8,000 workers to their payroll during the January-to-March period, while metal product suppliers hired 5,000, the official said, adding that the construction sector increased its workforce by 7,000.

By amount, airlines offered the highest monthly take-home pay at NT$74,292, followed by electricity and gas suppliers at NT$65,164, and insurance and financial institutions at NT$64,040, it said.

Transportation companies had the lowest monthly wages at NT$28,352, lower than educational facilities excluding public and private schools at NT$28,393, it said.