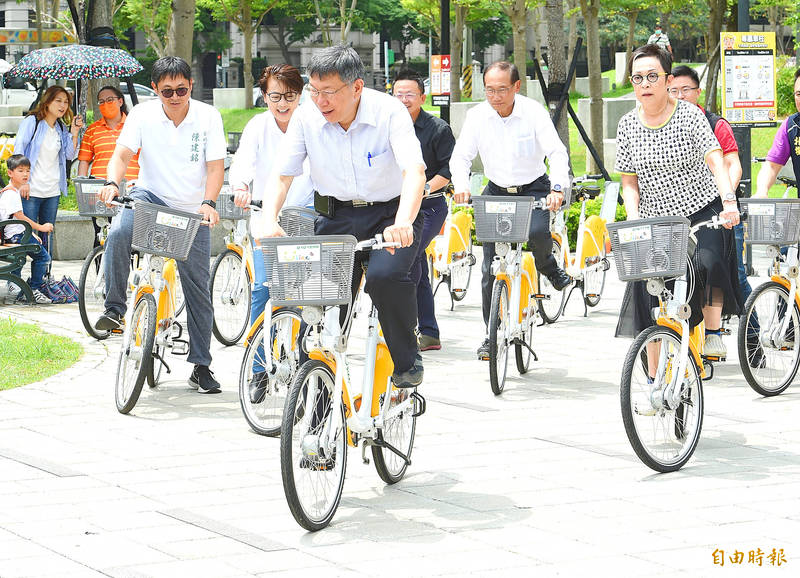 The Taipei City Government yesterday officially launched the “YouBike 2.0” system, an upgraded version of the bicycle rental service, saying that it aims to expand the service to more than 1,200 stations throughout the city.

The system yesterday activated 160 new stations, in addition to 103 stations in the Gongguan （公館） shopping area near the National Taiwan University campus.

A trial run of YouBike2.0 was launched there in January last year.

The Taipei Department of Transportation said that bicycles of the upgraded system feature solar panels and card censors, which allow users to rent them by swiping their EasyCard or scanning a QR code with their smartphone, replacing the smart panels on bicycle stands of the older system.

The reason for replacing the old system is that many borough wardens have asked for more stations to be set up, which would require installing an excessive amount of wires to power the stands of the old system, he said.

Due to built-in control panels on the new bikes, their stands do not require electrification and occupy less space, making it easier for the city to set up new stations and reach the goal of more than 1,200 stations faster, Ko said.

The transportation department said that new stations would be launched at 10am on Tuesdays and Fridays, with the information published on its Web site （www.youbike.com.tw） every Monday and Thursday.

There are 263 stations of the updated system, the department said, adding that it expects to expand the number to more than 750 by the end of this year.

Department Director Chen Hsueh-tai （陳學台） said that the two systems are not compatible, urging users to pay attention to the differences when renting bikes.

The old system has orange bikes and each stand accommodates two bikes, while bikes of the new system are white and each stand only docks one bike, he said.