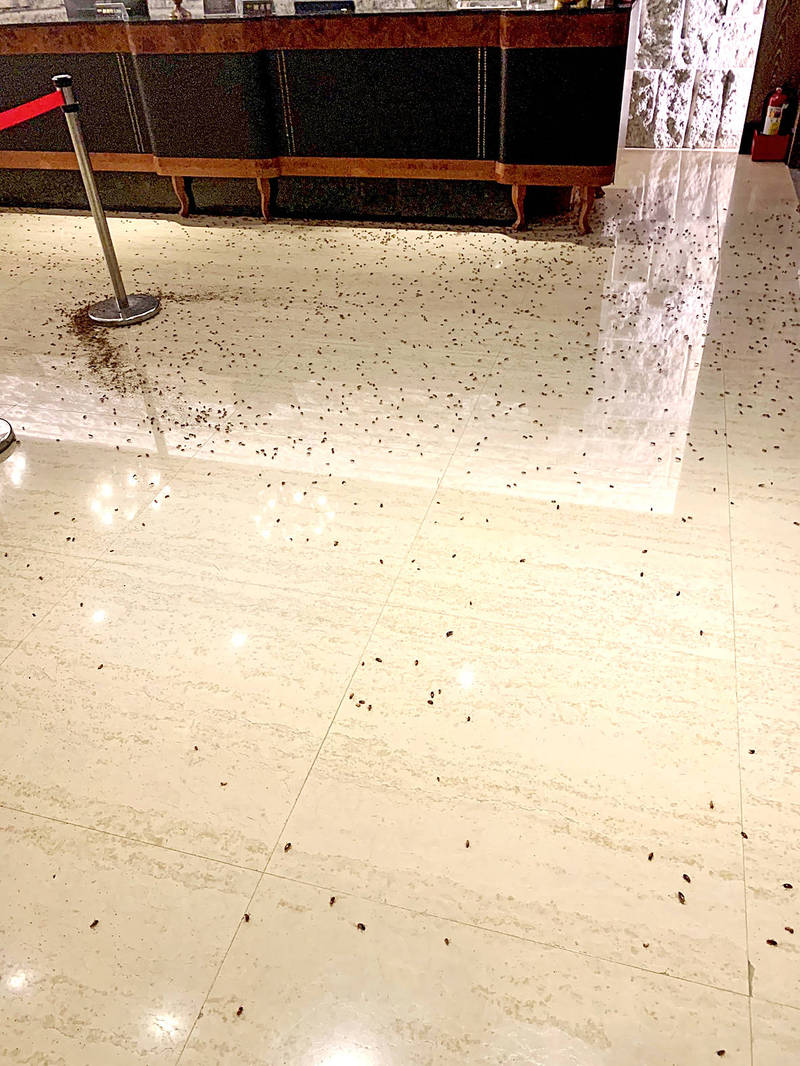 Cockroaches scuttle at a reception area outside a restaurant in Taipei on Monday. Photo courtesy of Taipei City Councilor Wang Hsin-yi

A debt dispute between a restaurant owner and a criminal ring might be behind a bizarre cockroach attack at the Taipei eatery on Monday night while it was hosting a police gathering, Taipei Police Commissioner Chen Jia-chang （陳嘉昌） said yesterday.

Preliminary findings of a police investigation into the case at the G House Taipei suggest that the unusual incident might have been directed at the restaurant’s owner, who allegedly owes money to the Bamboo Union, Chen said.

The suspects were Bamboo Union members and there was no evidence indicating that the cockroaches were targeted at the police officers at the restaurant, he said.

He pledged to quickly arrest those involved and present details of the case.

Chen condemned the behavior and called it an act of violence, similar to attacking people with excrement or paint.

Those convicted would be dealt with in accordance with law, he said.

Zhongshan Deputy Chief Yu Yung-lien （余永廉） said that at 7:24pm on Monday, two men in black entered the restaurant and tossed what was estimated to be more than 1,000 small roaches — a type fed to fish — into the air near a counter on the second floor.

Additional police officers arrived three minutes after receiving a report, by which time the two men had fled on a scooter, Yu said.

Two of them dumped the roaches in the restaurant, two were lookouts and one was a driver, he said.

They left in different directions and vehicles to evade possible pursuers, but they would be caught, Yu said.

A police task force said that the incident was unlikely to be related to Chen’s presence or the police gathering, which was attended by more than 700 people, because Chen arrived after the roaches had been released.

The incident might be over unsettled debts with the gang, it said, adding that police would track down the person who ordered the attack and any others involved.