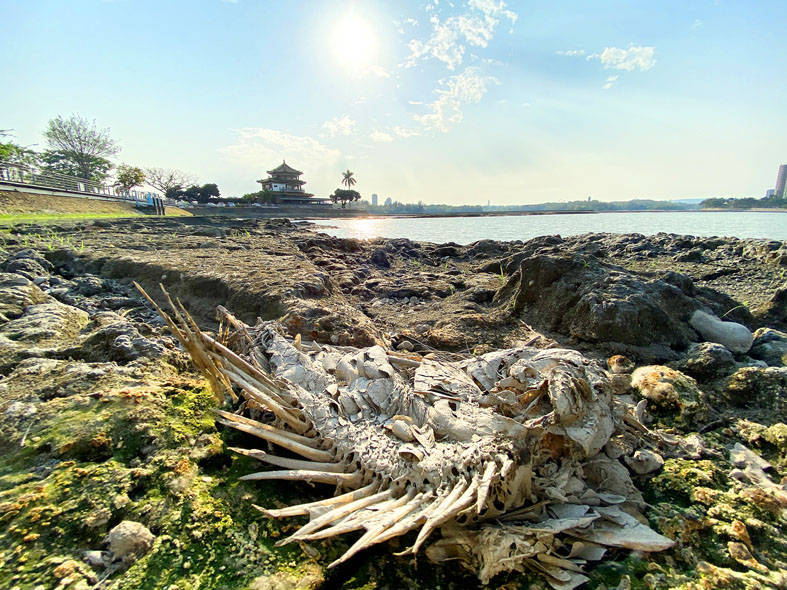 A desiccated fish is pictured in a dried-up section of Chengcing Lake Reservoir on April 1, when the reservoir was filled to less than 40 percent of capacity. Photo: CNA

The Ministry of Economic Affairs is to tighten water restrictions to prevent Taiwan from running out of water before the rainy season starts next month, the ministry said yesterday.

Non-industrial large water users would have to reduce water consumption by 20 percent, up from 10 percent, it added.

In Taoyuan, water pressure for households is to be reduced all day, in extension to the current nighttime reduction.

“As the water shortage extends, there are only three things we can do: conserve, reallocate and find new sources of water,” Minister of Economic Affairs Wang Mei-hua （王美花） told reporters at the Central Emergency Operation Center dedicated to the nation’s water situation.

Taichung and Miaoli County, which face the strongest effects of the shortage, are on “red alert,” and water supply in the area is switched off on two days per week.

The measure has helped save about 15 percent of water, Wang said.

The alert level in Hsinchu would not be upgraded to red, she said, adding that no water outages were planned.

Pipelines supplying water from less affected regions have been instrumental in mitigating the situation, Wang said.

New wells are also being drilled at a breakneck pace, with all available CPC Corp, Taiwan （台灣中油） engineers being employed by the ministry, she said.

“At two sites near Taichung, engineers struck ground water,” Wang said. “We are expediting the installation of filters and the certification of the well.”

Engineers are drilling three wells in Miaoli County’s Liyutan （鯉魚潭）, which would provide 15,000 tonnes per day, she said.

Asked whether the water level at the Shimen Reservoir （石門水庫）, which supplies the Taoyuan-Hsinchu pipeline, might fall to below 30 percent, Wang said that the level is above expectations.

“In February and March, we were expecting the level to be lower than it is now,” Wang said. “We are trying to find alternate sources to make sure that the level remains as high as possible.”